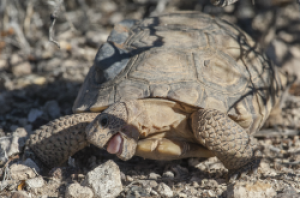 Simmons added that Zoo officials don’t yet know if the center will close and that each year, it undergoes a review process before funds are approved.

The Zoo took over management of the center in 2009.  Since then, Simmons reports, “we’ve released more than 1,500 back into the wild.”

Tortoises at the center are screened for illnesses, since diseased animals can’t be released into the wild where they could threaten other tortoises.  But  efforts are made to find adoptive homes for even many ill tortoises, she said, though some “terribly ill” animals are euthanized.

Asked about the AP report that half of all tortoises at the facility could be euthanized if it is forced to close, Simmons replied, “I don’t know where that came from. ...Euthanasia is very rare and usually only when an animal first comes in.” She added, “We were quite horrified to see this story; we weren’t contacted and we had no idea.”

On August 26, the U.S. Fish and WIldlife Service issued a media statement that also contradicts the AP report.  “We want the public to know that the FWS is not euthanizing healthy tortoises,” the release states.

The center was established in 1990 to receive wild tortoises in harm’s way from development. It currently houses about 1,000 desert tortoises.  The center’s primary goal is to return Nevadan desert tortoises to the wild, though many tortoises at the facility are from other states or even other species—pets turned back in by area residents.  Currently 98% of the tortoises are unwanted pets, according to USFW.

Pet tortoises that are diseased or in poor health may be euthanized “but only as a last resort,” USFW maintains.  “All healthy tortoises at the DTCC will be relocated to sites that will support the recovery of the species.”

Progress is being made on translocating healthy tortoises from the facility to the wild, USFW confirms.  A Programmatic Environmental Assessment is complete and tortoises are being moved to an approved site in Trout Canyon, Nevada. Public scoping for a second translocation plan was completed August 22 for a proposed site south of Coyote Springs, Nevada.

It is true, however, that the DTCC “does not currently have the capacity or the funding to accept and care for additional tortoises.”

But that explanation isn’t enough to satisfy some environmentalists and citizens concerned over the future of the species.

Janine Blaeloch, director of the Western Lands Project, believes money from sales of Bureau of Land Management properties should be used to keep the tortoise shelter open.    One recent land sale included a specific provision requiring $1.1 million in expenditures for desert tortoise monitoring, she observed.

“BLM has raked in more than $3 billion from these sales of public land,” she stated, the Washington Post reported. “Shutting down the tortoise refuge for lack of $1 million a year is ludicrous and shameful.”

George Courser, an East County resident, said he believes funds could be found and noted that the BLM has a record of allowing off-road racing events that cause costly damage. He also questioned why the Zoo, which benefits from property leases from  the City of San Diego, “can’t or won’t save these helpless reptiles” by providing funds to keep the center in Nevada open.

The BLM has “a reputation of squandering precious budget dollars on bureaucratic blunders not associated with governance, conservation or stewardship of American land and habitats,” concluded Courser. “This appears to be another example of grossly misplaced priorities, almost non-existent communication of public input.”