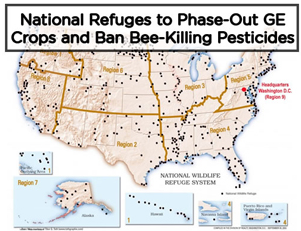 August 10, 2014 (San Diego)-The U.S. Fish and Wildlife Service has announced that no more genetically engineered crops or pesticides toxic to bees will be used at any National Wildlife Refuges across the country. This brings protection to wildlife n over 150 million acres of federal land, including  refuges here in San Diego County.

The Center for Food Safety, a consumer advocacy group, says the significance of this decision can’t be overstated.  Fish and Wildlife Service is the first federal agency to restrict the use of genetically engineered crops and neonicotinoid pesticides in farming in the U.S.

In an email sent to members, the Center calls this action “ a long overdue step towards preserving our native ecosystems and their plants, bees, birds, aquatic animals, and other wildlife from the harmful effects of GE crops and pesticide use.”

It also shows that grassroots and legal muscle of consumer groups is a force to be reckoned with – even for a powerful federal agency.

For the past decade, the Center for Food Safety spearheaded five separate lawsuits challenging these harmful practices on wildlife refuge regions across the country, and stopping them, region by region.  Because of these successful legal actions, courts have concluded that GE crops on refuges endanger the very spaces and species that the U.S. Fish & Wildlife SErviceis tasked with protecting.  So the Center for Food Safety filed nationwide legal petitions demanding the FWS stop the practice nationally.

Now, the consumer advocacy group is locked in a new court battle to next hold the U.S. Environmental Protection Agency accountable for its failure to protect pollinators such as bees and butterflies from these toxic pesticides.

I lived in Yolo County for a while where there's a lot of pesticide spraying and burning rice crops with pesticide residues. They had a saying, if you don't have allergies when you move here, you will when you leave. True; I picked up allergies there.
The term sounds innocent but the reality is the planes aren't dropping fairy dust. It's toxic stuff. I was driving Interstate 8 in Imperial Valley and saw a plane making passes over a produce field. It was great to watch the pilot make a low pass over the field and then do a nose up steep u-turn and do it again. A talented pilot and a dangerous job. There's a dumpster-size container full of empty five gallon cans that held herbicides and pesticides.