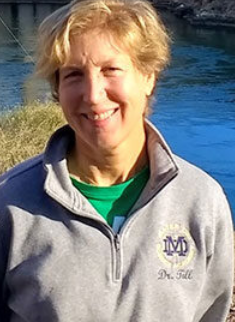 Update: At their meeting on February 16, Padre Dam's Board of Directors voted to begin the approval process of a time change from 3:30 p.m. to 4 p.m. Staff will first research the change, such as impacts on other personnel's schedules and any financial ramifications, before sending it back to the Board of Directors for final approval at a later meeting, as per their rules.

February 15, 2022 (Santee) – Suzanne Till, a teacher, has asked her colleagues on the Padre Dam Municipal Water District Board to move meeting times from 3:30 to 4 p.m. since she has repeatedly been late due to the long commute from her job at a Chula Vista school.  But so far, the board has not done so.  The issue of moving the meeting time to later will be on the agenda for the board’s virtual meeting on Wednesday, Feb. 16 at 3:30 p.m., item 12.

But some fear the board majority, all Republicans, may vote to oust Till, a Democrat, for tardiness in a partisan maneuver rather than accommodate a minor shift in meeting times. Till has fought against water rates, also opposing fines for late payments and water shutoffs during the pandemic. She holds a PhD in water resources geography and is a former Marine Corps Captain.  Her website details her record:  www.suzannetill.com .

“People are mad at the high water rates for rate payers for Padre Dam MWD, despite party preference,” she wrote in an email to party officials forwarded to ECM.  ““I have requested to move the Board meetings to 4PM, but no action by the Board.  I have stated that Division 2 has elected me to represent them, and the voters of Division 2 are not receiving adequate or full representation.  At the last Board meeting, February 2, I was late, missed three items on the Agenda, and  I brought this issue up again, requesting a 4PM start time.  You can request a recording of the meeting from Padre Dam (if you request it by February 16).”

In the recording, which ECM obtained after the initial publication of this article, the board chair asked whether a 3:45 start time might work but made no commitment on changing the meeting time.

When Till was first elected, the board was meeting remotely due to the pandemic and her work as a teacher was also being done from home, so she was able to participate on her home computer without mssing any portions of meetings. But the return to in-person teaching and meetings has raised the timeliness issue.

In her email to part officials, Till also asked for support from backers at the meeting.

A party insider spoke to ECM under condition of anonymity.  The source notes that Till is “an extremely well-prepared” director whose expertise is recognized as an expert witness in judicial matters involving water.

“Those who are her fellow board directors, are wealthy individuals who could care less about anything except their ability to over-rule a smart, woman, who happens to be a Democrat instead of a Republican., like them,” the party insider says.  “Their intent is to oust her from the board.  They easily could change the time of the meeting to accommodate her schedule, as well as allow other working people to participate in their own governance at  later and evening meetings.”

Indeed, some other local boards have adjusted meeting times in the past at the request of members or the public, and Padre Dam is one of the few East County boards that continues to meet afternoons instead of meetings.

The party source suggests the board is showing bias against working people such as Till.  “She is a working mom, who has to be late, since she teaches in Chula Vista.  The earliest she can be there is 4 p.m.  None of the millionaire, other board members has to work.”

When the majority of the board insisted that the law required fines and water shutoffs for people late making payments, Till asked the board attorney to research the legal status.

“Our director was correct. There is no law requiring either penalty,” the party source told ECM. “Our Dem also fought the custom of paying for three district memberships in three chambers of commerce in water district service areas.  The directors pay themselves to attend chamber meetings.  Then, the chambers all endorse the current board members for re-election.  Since our director raised questions about the legality of this, she has not been invited to any chamber's event.  This seems corrupt to me.”

The public can speak or submit comments on item 12, the issue of whether board meetings should be moved to 4 p.m. or potentially, later in the evening to accommodate not only Till, but working people who wish to participate.

You can view the meeting via webinar at this link:  https://attendee.gotowebinar.com/register/4394944110070806795. Enter your name and email address to register for the meeting.

To speak, after registering for the webinar, click the hand raise icon and unmute when asked to speak.

Written comments may be submitted in writing through the public comment e-form at least 30 minutes before the 3:30 meeting start time.

Correction: An earlier version of this article indicated that Till had repeatedly asked to have the meeting time changed, however the issue was raised only at the last meeting. Our source has apologized for providing inaccurate information to ECM that the normally reliable party source had misunderstood.

Why is East County Magazine misleading the public? This article rewritten to exclude accusations and remove information not in the original article. Miriam, you're the unnamed party official, right?

The article was changed becuase 1) after receiving the audio of the last meeting it didn't fully corroborate what our source had told us and 2) the source contacted us to advise us of an inaccuracy in what had been sent to us -- the source had indicated Till had repeatedly been rebuffed in requesting a new meeting time, when in fact she had only brought it up once.

Our source was a prominent party member/official who has been a reliable source on several stories in the past, and had been accurate previously.

the padre board is a bunch of tRump racists and only care about themselves!!
This is the most sexist and misandry accounts I've seen to date. In this article Suzanne Till seems to state she is a victim of everyone and everything. Did she truly research the requirements of the position before she ran? If so, did she expect that every other member of the board should alter their schedules to suit her? Just because she's a woman? Or is there some other moronic reason? To whine about having to pay her own Chamber of Commerce dues, just like all other board members, is most laughable. Thank you for that nugget. No Suzanne Till, you are not a victim, you were ignorant. You were ignorant to the requirements of the position you sought to be elected to. And you are ignorant if you think you can take your fellow board members down your crazy town path, just because you are a woman.