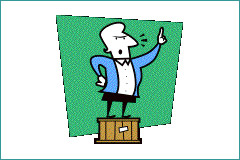 April 8, 2012 (San Diego)--Long before the time of man, all animals used to talk.  And they talked with each other, not just squirrels to squirrels and lions to lions. In fact, the animals did a lot of bitching and moaning behind each other’s back, which started all the trouble, as it usually does.

Being larger than anyone else, the elephants hogged the waterhole and muddied it up till practically nobody wanted to drink it. Elephants barreled along the forest trails, stepping on animals not agile enough to dodge them.  Elephants ate entire trees, leaving monkeys and birds homeless and hungry.

So the animals held a convention. The elephants were not invited.  One by one, the animals described situations where the greedy and unthinking elephants killed or injured their fellow creatures.  The Convention lasted a week.  When it was over the rhino was selected to take the bad news to the elephants.

“It has been decided that since you continue to be greedy, insensitive, and dangerous to your fellow animals that you be punished.  From this day on elephants shall no longer speak to each other or other animals.  Instead, you will make the most outrageous and cacophonous bellowing that all the animals will run away from you and your selfish and greedy behavior.” said Rhino.

“Fine!” said elephant.  “Can we still be the symbol of the Republican Party?”

“Hell, yes!” said Rhino. “We are as afraid of them as we are of elephants.”