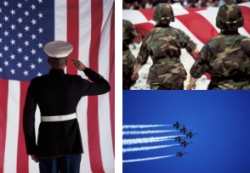 May 31, 2010 (San Diego) -- On Memorial Day we pay tribute to those brave souls who risk life and limb that we may live in a free, democratic society. But those who serve often sacrifice more than life and limb.

They often return with shattered minds and a guilty conscience. Often the invisible psychic wounds are worse than the physical wounds. It's not just the alcohol, drugs, and divorce. The scenes of death and destruction they witness often destroy their capacity to trust.

My father was born and raised Catholic, and to all accounts was devoted. He flew 35 missions in Korea, dropping bombs on the Yalu River Bridges. But when he returned from Korea his religious feelings had disappeared.

He never spoke to his children of his service to his country. He took it for granted. But the Bomb changed his feelings about warfare, and as he got older you could see he was conflicted about his wartime experience.

He came home to the US and served in the US Air Force for nearly thirty years. My father kept his feelings to himself. but I always felt that in many ways he carried a deep and abiding sense of guilt for surviving when others gave their lives. That guilt also made it difficult for him to communicate, and he carried a heavy burden none of us can easily understand. Like all combat veterans, God may have been the co-pilot, but he was at best a silent partner.

He is now buried in Arlington National Cemetery, where his tombstone reads:

I do understand the pain that your father felt. If we just put our self on him, it is really not that easy living away from your family. The only family that you have were your colleague. Worst is that when you have witnessed how they fought for freedom together with you and then it just ended up dying and you alone have survived it. Its the guilt, the loneliness, and also the grieving since I know that your father don't lost his colleagues but his brothers not in blood but at heart. I do salute our soldiers and I always do have respect and high regards on them. Dorothy