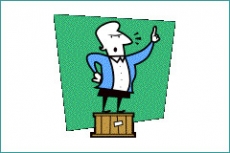 October 9, 2010 (San Diego) -- As voters watch scandal after scandal rip apart state and municipal politics. most voters are unaware of the gorilla in the budget- redevelopment. According to the LA Times, “ After the savings and loan scandal, the HUD scandal, the EPA scandal and the Pentagon spending scandal, the next scandal to be uncovered will be the redevelopment scandal in the cities across the nation.”

Developers are moving in and promoting the stealing of private property from owners of property just because these properties happen to be on valuable land that offers developers profit-making opportunities. The city government is encouraged to expropriate this private property, giving the rightful owners minimal compensation which would not permit them to even begin to duplicate their investment at current market prices.

Taxpayers do not realize much redevelopment money is federal, not state or local. Entire low-income communities can be declared "blighted" , then torn down with little regard for the homelessness and joblessness that result. Often local businessmen sell their unsellable real estate at pumped-up prices, and then get it back again later, tax-free, and built upon, thanks to the taxpayers.

What's worse, redevelopment budgets are kept separate from local and state budgets. These huge budgets are not released to the public, making them a powerful and dangerous card to play in local politics. Redevelopment funds have been used to pay for local politician's campaign debts, mistresses, and junkets. Meetings are often held at odd times and places, making public input irreverent. In effect, the public has to buy back its own property, now encumbered with high-interest loans and high property taxes. It is theft, pure and simple. Redevelopment is a shadow government which operates off the radar, without public input, and with disastrous effect on local politics.