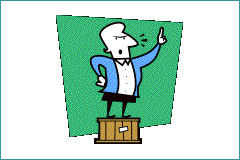 Nothing but the Truth!
By Will Power
February 26, 2012 (San Diego)--The LA Times ran a story which criticized Obama for not keeping gas prices lower. That’s hilarious!  A Democratic President can no more control gas pricing than control the weather. With the Conservatives in Congress blocking nearly all Climate Change and Alternative Energy programs it is easy to see the Oil Dinosaurs are in charge of US Energy Policy. In fact, a case could be made the Big Oil controls not only Foreign Policy, but the Beltway itself.
Big Oil has money, cash on hand- for bribing foreign officials, overthrowing governments, influencing elections both foreign and domestic, and during the run-up to a US Presidential Election no amount of cash will be too small.
Thanks to the Citizens United decision to allow unlimited corporate contributions there will be no limit to the amount of cash Big Oil can sling around to SuperPacs fighting to support the Oil monopoly.
Then there is the Big Lie.  That lie is that Obama is friendly with Big Oil.  Sure, they’ll send him just enough money to lose by a substantial margin.  But the Republican Party is the party of Bush and Big Oil.  The spin doctors hope they can fool you into believing otherwise. The biggest obstacle to US energy independence is Big Oil. They have the US consumer right where they want them- under their thumb. My advice- buy a bicycle! It is just going to get worse. The gas price spiral is a death spiral and government is powerless to stop it.
Will Power is a retired history teacher and creative writing instructor. The views in this column reflect those of the author and do not necessarily reflect the views of East County Magazine.