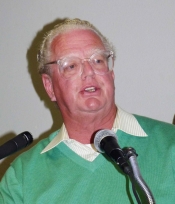 Lerachblames Congress for repealing consumer protections that were enacted in the 1930s. Repeal of those laws has allowed speculation with pension funds to occur--leading to huge losses.

While occasional abuses such as pension spiking may merit some benefit reforms, those are minor compared to a largely unrecognized scandal, the financial expert indicated. “The fault lies with Wall Street,” he concluded. “They abused these funds--while pocketing billions to run them into the ditch.”

How did this happen—and what can be done now?

A look at the past suggests that the adage "those who fail to study history are doomed to repeat it" is indeed true. In the early part of the 20th century, financial robber barons known as “banksters” preyed on unsuspecting investors, leading to the 1929 financial crash.  Crash of the stock market “ended the dreams and hopes of an entire generation,” Lerach said of the event that triggered the Great Depression. “By 1932, Wall Street faced ruin. They were cornered.”

President Franklin Delano Roosevelt’s administration opted against nationalizing the banks and instead decided to protect capitalism by creating a highly regulated system, Lerach noted. The Banking Act of 1933, also known as the Glass-Steagall Act, imposed a stringent regulatory framework designed to prevent the destruction of wealth that had occurred in the pre-regulatory era.

“Over time, assisted by World War II, the U.S. recovered and became a financial colossus,” Lerach recalled. “We created more wealth than ever in the history of mankind.” 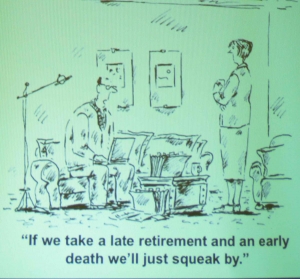 But then Wall Street captured control of Congress, which dismantled regulations. “Citizens were seduced by the promise of greater prosperity by tearing down regulatory framework,” Lerach explained. Glass-Steagall was repealed, allowing big banks and Savings and Loan institutions to combine. In addition to deregulating S&Ls, Congress restricted the rights of investors to hold companies accountable.

In addition, Lerach said, “Wall Street made sure the regulatory agencies were in the hands of those who were actively and overtly hostile to regulations.” As a result,enforcements were curtailed and rules rolled back, resulting in behemoth-sized banks and less regulatory oversight—which in turn resulted in the collapse of the S&L industry, causing investors and taxpayers to lose trillions of dollars. Then came the dot.com meltdown in 2000 and 2001, followed by the Enron and Worldcom collapses which cost pension funds trillions and further Wall Street scandals. “Ten trillion dollars were lost by investors again, in months,” he said.

Among the “reforms” passed by Congress was a Private Securities Reform Act known on Capitol Hill as the “Get Lerach Act”, following the securities lawyer’s success in winning huge returns for defrauded shareholders of companies including $7.2 billion for ENRON shareholders.

Lerach says the loss of investors’ funds in the banking industry collapse and other scandals that have rocked the financial world were “a direct result of tearing down regulatory frameworks put in place 75 years earlier, when we had created the safest markets in the world….We forgot our history.”

Though speaking at a La Mesa-Foothills Democratic Club meeting last Wednesday night, Lerach (who has also spoken to a local lawyer's association)  faulted members of Congress in both parties for bowing to Wall Street special interests. He faults Republican and Democratic legislators for dismantling regulations and rules, and criticized President Obama for appointing former Goldman Sachs executives as economic advisors in the White House and high-ranking spots the U.S. Treasury.

“We had to save the banks,” he said of the bailout, “but why didn’t we make the banks agree that we’ll reimpose Glass Steagall? …Instead we let them go.”

He predicts that pension funds will be the next financial crisis in America. What’s happened is that Wall Street money managers have taken control of pension funds once managed by individuals or state employees who invested conservatively. “Wall Street saw honey pots and captured them,” he said.

Corporate pensions in the U.S. were estimated to be close to $500 billion underfunded by 2008-09, he noted. After speculating wildly with pension funds and discovering there was not nearly enough money to pay out pensions earned by retirees, Wall Street then persuaded Congress to create 401K funds, which he calls a “scheme” that resulted in “all too many pigeons for the unscrupulous.” Losses of over $2 trillion resulted, he said.

“Conservatives scapegoat public employees as a privileged protected class,” he said, citing the battle over public employee pensions in Wisconsin as an example. To cover losses from irresponsible investment of pension funds, politicians backed by powerful financial interests now seek to cut pensioners’ retirement benefits and create two-tiered systems so new employees will have to pay more and have lower retirement benefits when they reach retirement age.

Such proposals amount to a cover-up for state pension fund managers who failed to set aside enough money, Lerach suggests. In some cases fund managers set aside only a fraction of what actuaries recommended as needed—and lost money in risky investment while pocketing enormous fees. “The truth is, public pension funds have become sinkholes,” he said, adding that the fault lies not with employees, but with fund managers.

It wasn’t always that way. After World War II, public pension funds were handled to people who were careful, under a regulated system, to invest in fixed-income assets such as bonds. But Lerach observed, “Wall Street can’t make much money on that…so they bribed legislators” to repeal regulations “while promising deregulation would pay. They could not be more wrong.”

The University of California’s pension fund is a “tragic example of abuse,” he said. Once, it was managed wisely by five state employees who made careful investments. Up until 2000, the UC pension fund was 100% funded, Lerach noted. “But with George W. Bush boots on the ground, a new chair fired those five employees, fired 13 Wall Street managers and paid them $32 billion. Huge losses resulted.” Next the fund managers “did what gamblers often do—they doubled down,” Lerach said. “They took pensioners’ money and invested in hedge funds and collateralized debt obligation…that led to hundreds of billions of dollars in losses. Today, guided by Wall Street, they are taking even bigger risks.”

Another problem is unrealistic assumptions about return on investment.  The UC pension fund today is at least $50 billion underwater if one believes the U.C. Regents' assumption of 7.5-8.5 percent rate of return on investment portfolio for infinity, assumptions Lerach calls “Matterhorn-sized whoppers.” If you assume a rate of return of just 4.5 to 5 percent, the fund could be underfunded by as much as $500 billion,” he said. He faults a nationwide system of “corruption and kickbacks to corrupt officials” for making “horrific investments” such one large investment that lost “every single penny CALPERS put into it.”

That figure dwarfs the funds' own combined shortfall estimate of $55 billion as of July 2008, according to the report, which doesn't account for the more than $100 billion loss sustained by the funds during the recession. “That adds a further wrinkle to California's already precarious fiscal situation,” the Wall Street Journal concluded.

Why don’t the courts intervene? “We have the most pro-corporate Supreme Court in history,” Lerach noted; the court is currently controlled by Republican appointees with a strong record of ruling for large companies over the interested of employees, investors or consumers. The court recently held unlimited corporate spending on elections to be protected as free speech.

So what is the solution?

A cartoon displayed by Lerach shows a grim-faced retiree quipping to his wife, “If we take an late retirement and an early death, we’ll just squeak by.”

To protect pension funds, Lerach proposes, what’s needed is to “get the hands of Wall Street money managers off pension funds so we can stop the speculating.”

Next, he would create a new treasury bond that would pay 7 to 8 percent interest and be inflation protected. “Over seven or eight years, I would have all big pension funds transition so that 80% of funds are invested in these treasury bonds.”

This solution would not only save money on fees currently paid to Wall Street money managers, but would also assure a sufficient rate of return . In addition, it would help to pay down our national deficit.

“At least this way, we will be paying money to our fellow citizens,” he concluded, but concedes that he is not optimistic about the prospects of seeing such reforms implemented in time to forestall a major financial crisis for America's future retirees.

William Lerach’s career was chronicled in the best-selling book, Circle of Greed. Not without controversy himself, Lerach was convicted of paying incentives to plaintiffs in class action lawsuits. Formerly one of the nation’s most effective securities lawyers, Lerach is now taking aim at Wall Street on the lecture circuit, speaking to lawyers’ organizations and community groups as he predicts that failure of public and private pension funds will be the nation’s next major financial crisis.