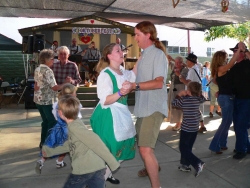 “This year, we're featuring a series of Community Days, in which elected officials and other honored members of the East County will be introduced and recognized throughout Oktoberfest,” said organizer Mike Anderson. “Representatives from these communities will also participate in our opening parade and ceremonial "Tapping the Wooden Keg," at 4:00 PM on Saturday, October 2, and again on Saturday, October 9. 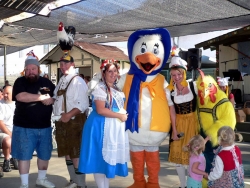 Oktoberfest in El Cajon is open to the public with an entry donation of $5 for adults, those under 21 and all active military are admitted for free. Parking is also free.

Enjoy authentic German food such as bratwurst, ox-on-the-spit, potato salad, potato pancakes, sauerkraut and red cabbage, plus a tasty variety of German pastries and pretzels. Soft drinks and adult beverages will be available, featuring a selection of German beers, wines, and liquors.

The Guggenbach-Buam band from Baden-Württemberg, Germany will once again provide entertainment. “These fine musicians entertain the crowd with a variety of German music, just as you would hear in the beer gardens of Munich! Folk dances, games, and contests are scheduled,” Anderson noted.

Check out vendor and craft booths. A Kids’ Fun Zone is also provided. Another highlight is a raffle with frequent door prize drawings, plus a grand prize of a round-trip flight for two to Germany. ! For more information please visit www.OktoberfestElCajon.com, or phone (619) 442-6637.

What a great Oktoberfest. Feels like you are right in the middle of Germany having a party!! There is great Music, Homecooked Food, Specialty Beers shipped from Germany, super surroundings and people dressed in traditional wear which really adds a special touch. I highly recommend this venue to anyone who wants a "mini vacation" for the day or night. See you there

its a great festival a and food too.