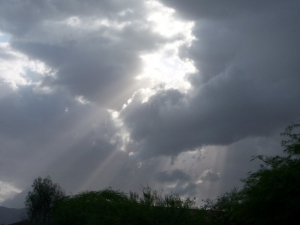 March 31, 2014 (San Diego County) - The National Weather Service has issued a wind advisory for San Diego County’s mountains and deserts from late afternoon Monday through Wednesday morning.  A low pressure system from the Gulf of Alaska will bring strong west winds with gusts up to 65 miles per hours.

Colder and wetter weather is also on tap for this week with showers starting Tuesday morning.  Showers will decrease in coverage Tuesday afternoon and evening before increasing again on Wednesday as low pressure settles over our area, the National Weather Service predicts.

The storm is expected to drop as much as an inch and a half of precipitation over the mountain areas, with snow dropping to 4,500 feet overnight on Tuesday.  Later in the week, expect clearing, though temperatures will remain cool through Friday.