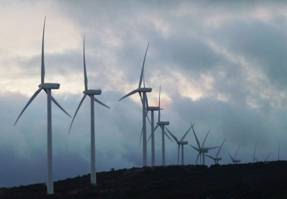 For better or worse, California’s wind generation is slated to increase six-fold. According to the American Wind Energy Association, our state currently produces 3,927 megawatts (MW) of wind power. Another 847 megawatts is under construction and a whopping 18,269 MW is in the queue.  If all are built, that would bring total wind generation in California to more than 24,000 MW—six times the current level.

Potentially, the state could produce even more--as much as 105,646 GWh if all areas with strong wind conditions were developed. In 2010, wind accounted for 3.3% of California’s power, or enough to power 1 million homes. According to a resource assessment from the National Renewable Energy Lab, California’s wind resources could provide up to 39.4 percent of the state’s current electricity needs.
First in the nation to develop wind power, our state currently ranks third in the nation for wind installation (behind Texas and Iowa. California wind generation is estimated to avoid the need for 7 million metric tons of carbon dioxide (which produces greenhouse gases that contribute to global climate change).
But the green gold rush is not without problems.
Wind incentives were first enacted in 1981. According to WindWatch, many turbines were abandoned in some California communities after subsidies expired in 1985. “They still stand today, rusted and broken, their developers long since gone or bankrupted, with no one to take them down. They are an unsightly industrial junk-yard, a horrible blight on the landscape, a monument to failed public policy,” WindWatch states.
Ken Lay and Enron pushed through subsidies and tax write-offs for the wind industry; Enron was touted as the world’s only fully-integrated wind power company. (General Electric later bought Enron’s wind turbine manufacturing business, while Florida Power and Light and others purchased Enron’s wind farms.) WindWatch further charges that electricity deregulation and the rise of the wind industry have shifted the management of our nation’s power system from electrical engineers to investment bankers. 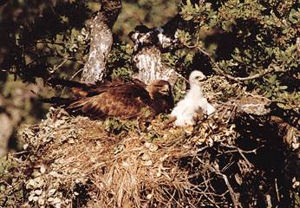 The industry has created jobs – 4,000 to 5,000 if you include indirect and direct jobs in 2010 in California. California is home to several wind manufacturers, including GE Energy and Ameron.  Many of those are construction jobs, however, and thus only temporary.
Another issue is bird kills. Thousands of eagles and other raptors have been killed at the Altamont Wind Farm alone.  View a video made by a scientist involved with documenting bird kills at Altamont:  http://www.youtube.com/watch?v=gzrsopSpIV4&feature=related
Today, records of bird kills at many wind farms cannot be accessed, since unlike key European countries where bird kill rates are staggeringly high, the U.S. does not require that bird kills be tracked. That’s why a recent request to federal authorities for records on wind farms on federal lands in California yielded no results.
This report discusses the"under the radar"  high operation and maintenance costs related to wind turbine repairs, in some cases $40,000 to $1.5 million per 1.5 MW turbine per year, and a higher rate of catastrophic failure in higher U.S. winds as compared to the same turbines operating in calmer winds in places like Germany: http://www.windenergyupdate.com/operations-maintenance-usa/documents/WindOMReportSamplePages_29Nov2011.pdf 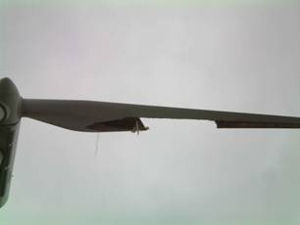 At the Kumeyaay Wind Farm on the Campo Indian reservation in East County, during a snowstorm with 70 mph winds in December 2009, all 25 turbines suffered catastrophic damage when an as-yet-unexplained blue arc flashed through the wind farm, ripping apart turbine blades and sending blades the size of jet airplane wings flying off onto the ground and freeway nearby.
Every blade had to be replaced and the wind farm was off line totally for about three months, raising serious questions about the reliability of wind energy.
Many turbine blinds still litter the ground today, according to Donna Tisdale, Boulevard Planning Group Chair. Tisdale sent a letter to Secretary Salazar at the U.S. Department of the Interior calling for an investigation.  He never answered.
“We are lucky that the December 7th electrical meltdown did not occur during a dry high-wind event,” Tisdale concluded, “which could have resulted in a catastrophic fire storm in this high fire danger zone.” 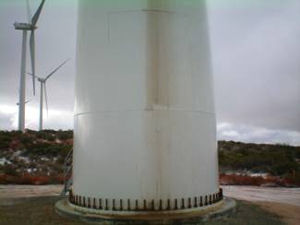 Around the world, people living near wind farms have frequently complained of health issues and diminished property values.
Nina Pierpont, a Johns Hopkins University School of Medicine trained M.D. and Princeton  Ph.D. authored a book titled Wind Turbine Syndrome with peer-reviewed data, albeit in a small study. An Amazon.com description states that  symptoms associated with turbine infrasound and low frequency noise are “ wind energy's dirty little secret. Many people living within 2 km (1.25 miles) of these spinning giants get sick. So sick that they often abandon (as in, lock the door and leave) their homes. Nobody wants to buy their acoustically toxic homes. The "lucky ones" get quietly bought out by the wind developers, who steadfastly refuse to acknowledge that Wind Turbine Syndrome exists. (And yet the wind developers thoughtfully include a confidentiality clause in the sales agreement, forbidding their victim from discussing the matter further.) “
Don Bonfiglio lives with three miles of the Kumeyaay Wind Farm. In a letter to the Bureau of Indian Affairs objecting to a proposed Shu’luuk wind farm also on Campo land, he claimed he suffers sleep deprivation since the turbines were installed. “Four out of seven days a week it sounds like helicopters are hovering over my house at 500 ft.,” he wrote. “The sound resembles a Thermo King refer unit on a tractor trailer a few hundred feet from my house. This is a constant "hum" that doesn't go away, day and night.”
Infigen, which makes turbines at the Campo facility, is experience financial troubles, Business Age in Australia recently reported: http://www.theage.com.au/business/wind-goes-out-of-infigen-energys-sails-20110301-1bd5o.html 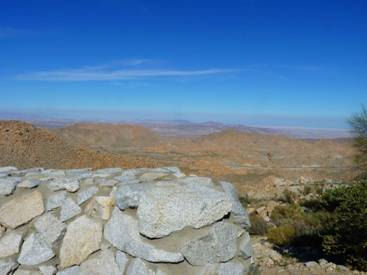 “Our community and surrounding area will be devastated if Invenergy is allowed to build their 125 new turbines on Campo tribal land, and Iberdrola Renewables is allowed to build their Tule Wind project in McCain Valley with 134 turbines, and Enel Green Power is allowed to build their 80 or so turbines in Jewel Valley and McCain Valley,” Bonfiglio wrote. “I hear there that Pattern Energy has plans for a  Kitchen Creek Wind project just west of Campo in the Cleveland National Forest, too. Not to mention Pattern Energy's Ocotillo Express to the east and Sempra's cross-border Energia Sierra Juarez wind project.”
Bonfiglio also wrote of visiting the current wind farm in Campo, where he was horrified to see a golf cart loaded up with a dozen large birds of prey, including the largest great horned owl he had ever seen.
“These turbines cause too much suffering for both people and wildlife,” he concluded. “Any financial gain is not worth the increased pain and suffering they will cause.”

Some of the worst environmental news in years. Huge tracts of beautiful open land carpeted over with hundreds of hideous eagle-killing towers. And all in the name of so-called "green energy."Could the irony be any richer or more cruel?

The invasion of the wind turbines is the second worst environmental disaster I have seen in my lifetime. Deforestation is number one. The corruption feeding this industry, by comparison, makes the Watergate Scandal look like an elementary school play.