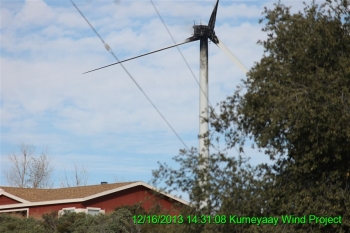 December 17, 2013 (Campo) – Yesterday’s explosion and brush fire sparked by a Gamesa wind turbine owned by Infigen at the Kumeyaay Wind facility in Campo, California has ignited new questions about the safety of wind turbines in this fire-prone region, where several of the worst wildfires in California history have previously scorched hundreds of thousands of acres.

In June, Infigen settled a lawsuit with Gamesa stemming from an earlier catastrophe at the same wind facility in 2009, when an explosive blast resulted in replacement of all 75 wind turbines, as ECM reported in an exclusive report.  But now Boulevard Planning Group Chair Donna Tisdale reveals, “The 75 turbine blades from the 2009 catastrophic failure that you covered are still laying on the ground at the wind farm and are highly flammable.”

Tisdale said local planners were advised that the blades were kept for evidence in the Infigen v. Gamesa lawsuit. But that suit was settled in June of this year.

The settlement in that case required Gamesa to provide warranties, turbine maintenance services and replacement components for the turbines until June 14, 2028 and to be responsible for cost of all turbine component replacements, including blades, subject to agreed liability caps, at an annual fixed fee.

This raises the issue of whether or not Gamesa has been adequately maintaining blades on the project’s turbines.  A neighbor and witness to yesterday’s turbine fire, David Elliott, told ECM he had recently been hearing  screeching and howling from the turbines. He suggested bearings might need replacing and that  perhaps more turbines may be in need of overhaul.

Christopher Noland, a planner on the Boulevard Planning Group, told ECM that planners are in the dark as to whether or not recommended maintenance is being done at the facility, because it is on tribal land not subject to Freedom of Information Act requests.  ““Nothing about that is public record,” he said, adding that he is very concerned about safety at this project as well as Iberdrola’s planned Tule Wind project in nearby McCain Valley.

Asked about the Tule Wind project, Noland had this to say. “Anything that goes up at Tule wind is a fire danger for the entire county.  Directionally, where it would be located and the direction of the Santa Ana winds, it spells trouble.”

A recent Iberdrola project in Groton, New Hampshire does not exactly inspire confidence.  Iberdrola failed to schedule inspections during construction and failed to install an automatic fire suppression system in its wind turbine housings.  As a result, the state Attorney General’s office has announced that the state Fire Marshal has the authority to shut the project down.

As for Gamesa,  the company’s turbines have been linked to fires in several other locations, including Iowa and Pennsylvania, leading to litigation in those cases as well as Campo in San Diego’s East County.

Despite its trouble-prone record at the Kumeyaay wind facility in Campo, Infigen, an Australian-based company, has proposals in the works to build two solar projects in nearby Boulevard, California – one on the Campo reservation next to the turbines.

Infigen has reportedly been plagued with a billion dollars in debt stemming from its origins with Babcock and Brown -- the same corporation that spawned Pattern Energy, developer of the trouble-prone Ocotillo Wind Energy Facility.

In Ocotillo, a new turbine dropped a multi-ton blade  prompting a worldwide curtailment; ECM's investigation revealed  major scandals including corruption convictions and bribery allegations against Siemens, the turbine/blade manufacturer; Pattern has also fallen far short of meeting its wind production estimates provided to the federal government in order to obtain taxpayer subsidized wind production tax credits for its Ocotillo project. Both Ocotillo and Tule Wind also relied on raptor studies by David Bittner, who has been convicted in federal court of illegally taking an eagle, had no permits and was found to have four freezers of dead federally protected migratory birds, further tainting the credibility of the wind industry in our region.

Local planners have raised concerns over potential fire hazards from numerous projects in the Boulevard/Campo area, where fire stations have recently had dark days even during peak fire season despite other massive new energy projects going in, including substations and high voltage power lines.

Former Cal Fire Battalion Chief Mark Ostrander has repeatedly warned in public hearings that he believes such projects could cause wildfires that could not be suppressed in Santa Ana winds or if other fires are burning  in the county, drawing down firefighting resources.  Wind turbines are particularly hazards due to their height, Ostrander has warned, noting that fire retardant from planes is ineffective at such heights and ground crews cannot fight fires beneath blades whirling off burning debris, leaving firefighters facing the prospect of having to stand by and wait for a fire to burn out of a wind farm.

By then, he fears, it could become an “inferno” that could threaten all of San Diego – just like the 2003 Cedar Fire or the 2007 firestorms which destroyed hundreds of thousands of acres, burned thousands of homes, forced widespread evacuations and resulted in deaths of some local residents.

Supervisor Dianne Jacob has also voiced opposition to wind turbines in the backcountry due severe and unmitigatable fire hazards.  Despite her objections, however, other Supervisors voted to approve Tule Wind as well as a County Wind Ordinance that could allow additional major turbine projects in this tinder-dry, fire-prone region over the objections of those who have fought wildfires and residents who have lived through the terror of fires fueled by hurricane-force 100 mile an hour winds in this region--the winds that entice wind developerst to the area.

Lawsuits filed by the Protect Our Communities Foundation, Backcountry Against Dumps and Donna Tisdale are pending over the Ocotillo and Tule Wind Projects, as well as the County wind ordinance--with fire danger among the list of concerns raised in the litigation and yesterday's blaze adding fuel to the firestorm of controversy over these wind energy facilities.

I also wonder about the risk posed by the (greatly) increased number of power lines around the county. Unlike traditional powerplants, wind and solar farms are scattered and diffuse--thus, more lines. They're ugly, destructive and dangerous.