UPDATE:  The President has signed into law a fiscal cliff deal that includes extension of the wind production tax credits, and also makes it easier for wind develpers to get them.  Projects now only need to break ground to qualify, not meet construction milestones.

December 31, 2012 (San Diego's East County) – ECM sources in Washington have informed us that language to extend $12 billion in wind production tax credits through 2013 have been added to a tentative deal reached to avert the “fiscal cliff.”  Senate leaders and  President Barack Obama have agreed on the deal, which the Senate is expected to vote on tonight. The House, however, has adjourned and will likely vote tomorrow or the next day.

Extension of the wind tax credits could have major ramifications for San Diego’s East County, where  Iberdrola’s Tule Wind has been approved but not yet built. Other wind projects are also proposed in our region. The wind industry has indicated that without a tax credit extension, many planned wind projects may not be built.

A national effort has been launched by wind power opponents asking citizens to urge Congressional members to oppose any deal that includes a wind tax credit extension. Local residents are among those contacting their Senators and House representatives to urge that wind production tax credit extensions not be granted.

Wind projects have resulted in massive damage to the environment and Native American cultural resources locally.  Eight tribal nations have voiced outrage over desecretation of sacred sites here due to industrial wind development on public lands. Secretary of the Interior Salazar issued take permits allowed killing of endangered bighorn ewes and lambs in the path of a wind project in Ocotillo. 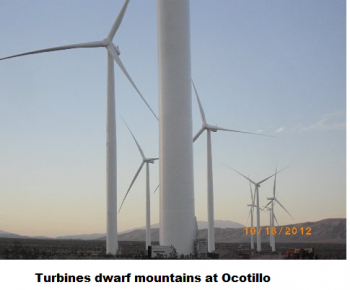 Neighbors of wind turbines have complained of serious health problems from infrasound and stray voltage, as well as annoyance from flashing lights at night and blade shadow flicker during the day. Members of the Manzanita Indian tribe in East Copunty are now enrolled in a health study through California State University, San Marcos, to determine if their health problems including cancer are caused by stray voltage 1,000 times normal measured in theire tribal hall, church and homes. A medical expert who conducted the voltage tests concluded the voltage was coming from a nearby wind project.

Wind energy has been touted as a means of reducing greenhouse gases. But recently, serious questions have also been raised over the amount of energy produced by wind projects versus the amount of fossil fuels required to manufacture and install wind turbine projects.  Many opponents contend that there are safer and cleaner ways to reduced carbon emissions, particularly in our region where rooftop solar and parking lot solar are viable options.

Objections to the wind tax credits has also come from some conservatives who dislike the $12 billion price tag for the subsidies.

Below is the contact information for San Diego’s Congressional representatives and for California’s two Senators.  (Note:  the 51st district is vacant due to Bob Filner’s resignation following his election as San Diego Mayor. Juan Vargas will be sworn in on January 3. )