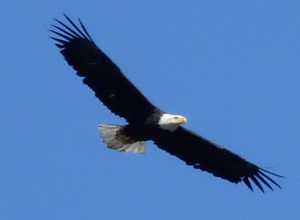 By Miriam Raftery and Sholeh Sisson

June 5, 2013 (Ontario, Canada) -- Esther Wrightman, the Canadian activist who documented Nextera Energy's removal of a bald eagle nest to make way for wind turbines, now faces a multi-million dollar lawsuit by the multi-national corporation.  Why?  Because she created a parody version of the company's logo which read "NexTerror" and "NextError."

The company makes the bizarre claim that Wrightman's logo on a wind resistance blog could somehow confuse its corporate customers.  But supporters of Wrightman contend the suit's real motivation is to silence a strong voice of dissent.  Nextera also pressured Wordpress to remove the logos, but Wordpress has put the logos back up, finding that no law was broken.

View a video report from the Sun News Network in Canada with many details on this story:  http://www.sunnewsnetwork.ca/video/2434478593001

It also showed a condor striking a turbine blade and tumbling to the ground and documented extensive health complaints by residents living near turbines in Canada, including many symptoms documented by physicians.

Bitter truths behind all the renewable power bullshit.

More proof (as if needed) that these solar/wind corporations, and the politicians behind them, are utterly conscienceless. Here in San Diego, it's no different. While one Boulevard resident tearfully pleaded with the County Supervisors to to protect her community and health from the devastating effects of wind turbines, representative from Iberdrola, the manufacturer, laughed.

Please take a moment to watch the story of Esther Wrightman.