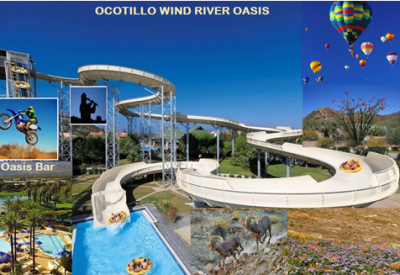 By Otto B. Happenin

April 1,2014 (Ocotillo) – A federal judge has ordered the Ocotillo Wind Energy Facility to be decommissioned, finding that the project has failed to produce even half of the power promised by its developer, who pocketed huge federal subsidies.  Much to the delight of environmentalists, tribes, and the long-suffering people of Ocotillo, Judge Roland Rock declared, “This is a wind project without wind, plus it's been an ecological nightmare. It’s time to tear it down.  Let’s roll!”

The judge also ordered that Native American remains be restored to ancient burial grounds and ceremonial sites shall be forever protected from further encroachment.  Desert wildflowers will be replanted across the 12,500 site to halt dust storms and prevent erosion.

As a finishing touch, at the former wind project entrance, a special “Monument to Folly” will be erected as an eternal reminder of what not to do on our public lands.  Artists are invited to submit their monument designs for a special design competition. The winner  will have the privilege of throwing the switch to commence demolition of the ill-fated wind turbine project.

The for posting this great article. You're always the first to publish REAL East County News