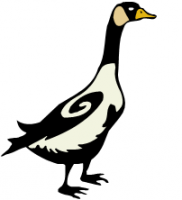 The Study, conducted at a university in Poland, included two groups of 20 geese (40 total) kept in paddocks for 12 weeks.  The first group was within 50 meters of a 2 megawatt Vestas wind turbine, while the second group was 500 meters away. The study measured noise in decibels and also measured infrasound to which the geese were exposed.  Blood tests were also taken to assess the health of the geese.

Decibel levels averaged over 56 decibels where the first group was kept and 58 decibels for the second group’s location.  Cortisol levels in the blood of geese in group I were significantly higher than in group II, and the impact was highest in males.  The levels, along with behavior such as not eating, were consistent with high levels of stress. “ Cortisol levels actually rose in both groups, compared to a control, suggesting that even 500 meters away is not a safe distance, researchers concluded.

By the end of the study, birds near the turbine had lost weight, weighing in at 10% less than those farther away.

The reaction of the birds confirmed that geese have a sensitive sense of hearing and are responding to both audible sounds and infrasound,”researchers found. They recommended that further studies be done to determine safe distances for keeping animals when wind turbines are present.

In San Diego County, where wind turbines are proposed in rural areas and wildlife habitat, the study raises troubling questions.  How safe are turbines near chickens, cattle, horses or other livestock commonly found in our region?  Moreover, what about the impacts on wildlife such as nesting birds, burrowing animals or even bighorn sheep?

Anecdotes from around the world have, for several years now, suggested that livestock kept near wind turbines exhibit signs of stress as well as reproductive problems such as stillbirths. But no scientific studies had been done to determine whether indeed, wind turbines were the cause.

Now the Polish study, though preliminary in its results, lends some validity to concerns raised over the safety of wind turbines near animals and human and suggests a need for caution when considering wind turbines proposed near residential areas, agricultural lands or wildlife preserves.