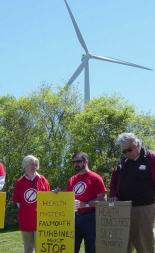 November 22, 2013 (San Diego’s East County) – For years, wind developers operated with impunity, not held responsible for harm to people, wildlife or communities. But a trio of landmark court rulings this month indicate a shift, with judges holding wind developers liable for the first time for impacts on human health, protected birds, and rural character.

In a landmark ruling today, a judge in Falmouth, Massachusetts ordered the town's three wind turbines shut off at night, on Sundays and on holidays to protect the health of residents.  ‘‘This is believed to be the first time that a court in the U.S. has ruled that there is sufficient evidence that wind turbines near residential areas are a health hazard to families living nearby,’’ said Virginia Irvine, president of Wind Wise Massachusetts..  The judge ruled that  operation of the turbines nonstop put residents at risk of ‘‘irreparable physical and psychological harm.”  Neighbors had complained of negative health impacts since the turbines were built.

Also this week, in the first-ever criminal prosecution of a wind company for illegal bird kills under the Migratory Treat Act,  Duke Energy Reneawbles Inc. pled guilty and was ordered to pay a million dollars. Duke's wind projects in Wyoming slaughtered 14 golden eagles and  149 other protected birds. See Department of Justice release on the fine.

In France, meanwhile, a judge earlier this month ordered 10 wind turbines taken down for destroying a community’s rural character with ““unsightliness of white and red flashing lights.”  In  France, 50 percent of wind projects are now in court, Alexandre Gady, president of the Society for the Protection of the Landscape and Aesthetics in France told the AFP.

Wind turbines in the U.S. face increasing resistance from residents amid an onslaught by the wind industry of larger turbines than in the past, magnifying negative impacts.

Heartening news! Sounds like the winds of sanity are beginning to prevail.