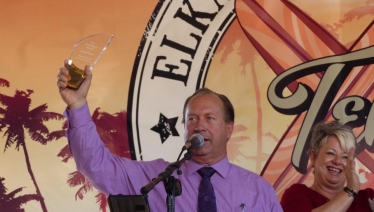 Photo, left:  Greg Maness, founder of the Trail Blazer awards, receives a surprise award of his own, presented by his wife, P.J. 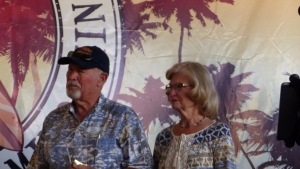 Moore’s partner, Terri Kerns, one of the original Trail Blazer recipients four years ago, has been a leader the Ramona Valley Vineyard Association that championed establishment of a four-tiered boutique winery ordinance that has helped San Diego’s wine industry blossom to become “the fastest growing wine region in the United States,” she said.  Today, our county has over 135 wineries in San Diego County, many of them award-winning, with thriving sub-regions including the Ramona Valley and Route 94 areas, as well as urban wineries. 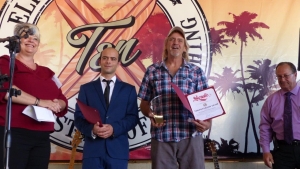 Moore, current RWA president, has worked to make the ordinance more business friendly in order to open doors for vineyards and wineries yet to come.  He also helped the Ramona Ranch Winery become San Diego’s first certified sustainable vineyard and winery. Raised in Oregon, he started a trucking company at 21, also studying studied welding and auto-cad design engineering.  Later, he utilized his engineering skills to become an innovator as a winemaker, winning many awards. He’s helped reinstate wine tasting competitions and provides consulting to others.

Greg Maness of Maness Vineyards, which presents the annual awards, said of Moore, “If you look hard enough, you will find him driving around Ramona’s pristine vineyards in his vintage Cadillac, helping at various harvests, shaking hands, and lending a hand to those who ask of him.” 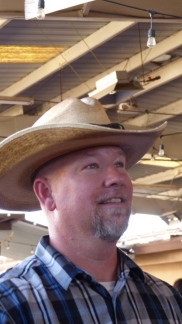 Rock Canyon’s owner, Tim Peterson, planted his first vineyard 17 years ago and now offers tours and tastings, producing over 500 cases and seven varieties of wines last year.  He now sells ot restaurants, stores and markets, establishing Alpine as an emerging wine-producing area.  But he also has a big heart—rescuing farm animals including donkeys and Clydesdale horses that appear on his wine labels.  This year, he’s starting an animal rescue foundation; he has also made hundreds of appearances at fundraising events to help others.

Maness says Peterson and his team are “reminding all of us that sacrifice and dedication to your craft it what it takes to become successful” while operating a gem in our backcountry.

Ric Bonnoront has a doctor of pharmacy degree. He planted his first vineyard in Jamul 20 years ago and joined the San Diego Amateur wine making society, also learning the craft of wine making from books, word of mouth and on-site training when the internet was in its infancy.  Now he gives lectures and seminars on how to grow wine grapes to help “many new growers to make their vineyard dreams come true,” Maness says.

Bonnoront also became a wine judge decades ago, but only recently began entering his own Red Wagon Vineyard wines into competitions, winning dozens of awards as proof that tenacity does pay off.  Today, he continues mentoring other vintners, also assisting in charitable fundraising efforts for Rady Children’s Hospital, the MS Society and more.

As a surprise finale to the awards presentations, P.J. Maness presented a fourth Trail Blazer award to her husband, Greg Maness—clearly a deserving recipient after his years of helping others a vineyard consultant, successful wine maker at Casi Cielo Winery at the couple’s adobe home in Jamul, founder of the Trail Blazer awards, and tireless promoter of the region’s wine industry.

The event was hosted by the San Diego East County Chamber of Commerce at the Elks Club’s El Cajon lodge, where guests enjoying sampling not only local wines, but also craft beers and foods from local restaurants.