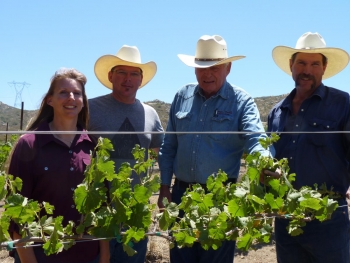 By Sholeh Sisson  and Miriam Raftery

June 14, 2013 (Campo)-- After passing winding roads and cow pastures in the most southern part of our County's backcountry, you will find Campo Creek Vineyards. Their winery won three bronze medals at last year’s San Diego County Fair in the amateur category.  Now the winery is bonded – and the Clark family hopes to next reap rewards in the professional category.

“This is a good climate up here for certain types of grapes – cabernet, merlot, and syrah …It takes a lot of work to do the nurturing,” said Mary Clark. Her family started planting vines here in 2003 and their winery now has more than 8,000 vines.

Their first 2000 vines were quickly reduced to just 250 “because gophers got ‘em,” said Bill Clark, the family patriarch.  Also  a Catholic deacon, he has been ministering to local Native American tribes since 1975.

Since then, all grapevines are planted with gopher mesh to protect them. “We’re out in the wild,” Bill said, adding that squirrels, wild turkeys, and even coyotes will also eat grapes. 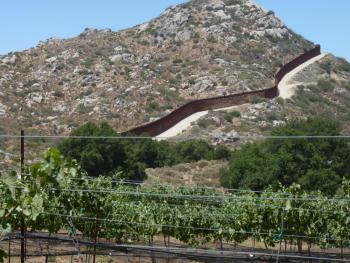 The family has owned the land here for 25 years. They found it due to a fortuitous highway mishap.  “We saw the place here and fell in love with it,” Bill recalls.

The winery is located along Highway 94 in the Campo area. The border fence snakes along boulder-strewn mountains at the rear of the 400-acre spread; oaks provide shade from sweltering summer sun and wildflowers add splashes of color near the vineyards.

Making wine has been a learning experience.  Family members have taken courses at Cal State San Marcos and programs through the East County Vintners Association to hone their craft.

“There’s a lot more to it than just putting a vine in the ground,” John Clark, Bill’s son, said.

The winery is a family affair.  Brothers Dave and Paul began looking to start a winery back in the late ‘90s, though a disease wiping out local vineyards delayed their search.  John, a third brother, also 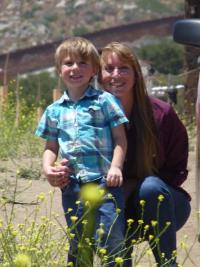 helps with the family’s operations which include raising cattle, pigs, rabbits and chickens as well as making wine jelly. Jimmie, 3, already shows eager interest in the family business.

“Dave came out every weekend and did the digging. I just kind of supervised,” Paul quipped.

After a rocky start and replanting vines lost to gophers, the family produced their first wines in 2003.  This year, they hope to produce six or seven tons of grapes.  The winery produces merlot, cabernet, and syrah –all red wines.  Recently they planted viognier, a white wine grape.

Merlot has been the most challenging to produce, requiring application of science and agricultural skills. “We really struggle with it, but it’s the perfect wine grape. It’s wonderful tasting,” Bill said. Ph  must be a precise 3.5 to 3.6 with an acid level below .06%.

Vines are planted 24 inches deep in soil mixed with mulch.  After the harvest the family has been known to celebrate with grape-stomps, inviting friends. Then a labor-intensive process begins that includes removing stems, crushing grapes, fermenting and pressing out juice with a large wooden press. 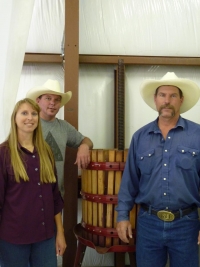 “We use flex tanks rather than wood barrels,” Bill said, explaining that the flex tanks cost about a third of French oak barrels and last much longer.  To infuse oak flavor, they suspend pieces of oak with a hook in the tanks.

Minerals in soil, water levels and watering schedule all affect how the wine will taste. Each winery has its own method.  Here, vines receive little water – just four gallons a week per vine for one-year-old vines on average, and about two gallons a week for older vines.

“When the color gets solid on the grapes, you want to stress the vines and cut back on water,” Bill advises. “As soon as the harvest is over, you want to water continually, heavily until the first rain.”

The building where the wine is made also doubles as a center for family activities, including their annual Thanksgiving dinner.

Next up, the Clark family has a new aspiration.  Mary revealed, “We are planning to open a tasting room.”

The tasting room is slated to open this fall.  The winery also offers a wine club, with discounts and special events for members sharing in the fruits of the Clark family's labors.