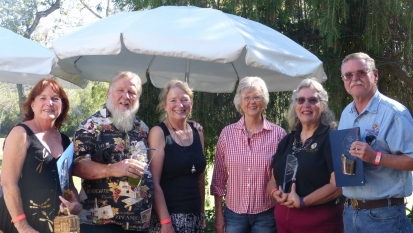 The winners were Sarah Babine and Grant Spotts from Granite Lion Cellars in, Steve and Marilyn Kahle from Woof and Rose Winery in Ramona and Drum and Jane Macomber, amateur wine makers and vineyard tour organizers.

Below are remarks from Greg and P.J. Maness on the winners. 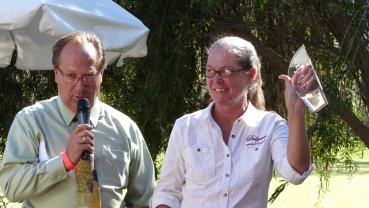 GREG MANESS: Our first trail blazer dynamic duo couple has worn many hats for many years and are an integral part of the visionary team who first thought up and began coordination of the new wine growers along the Highway 94. Here is the remarkable and amazing story of Sarah Babine and Grant Spotts.

PJ MANESS :  Sarah graduated from UC santa barbara with a ba in physiology and cell biology, then went on to study Medicine at the State University of New York at Stony Brook, graduating with an M.D. After completing internship and residency in Psychiatry at UC Davic Medical Center, she joined the faculty. Following a number of years teaching and providing clinical care, she followed her passion for genealogy to Maine, where she provided Psychiatric care in a family practice setting often visiting the state archives seeking her roots. In 2007 she reconnected with her high school sweet heart and moved back to Dulzura to be with Grant. Having long been an afficinado of fine wine, when the idea of planting a vineyard came up she was all in. Reviving the agricultural heritage of the old Clark Ranch, in Grants family since the 1880’s also resonated with her intrest in family roots. Sarah and Grant collaborate in the wine making process, with her chemistry background, and combined with his mechanical engineering abilities they make an excellent dynamic duo producing wines of distinction for Dulzura Vineyard and Granite Lion Cellars.

Grant the high school sweet heart graduated from Brooks Institute in Santa Barbara in 1973 with a degree in photographic illustration and began his career in northern California as a photographer and cinematographer who provided motion picture and still photographic services to advertising agencies. In 1976 he transitioned from still photography to television and he formed a film production company which produced commercials for clients such as Safeway, Blue Diamond Almonds, Bank of America, Unocal and Gallo Family of Wines. In 2001, Grant acquired the family’s historic farm and ranch in Dulzura which previously farmed and also grew figs as a source of income. Along with their team they have reviatlized the 130 year old property with an eye towards retirement. In 2009 a large format vineyard was planted with over a dozen varietlas on site. These days the Historic Clark Ranch is now home to the Dulzura Vineyard and Winery. Now sewing together the richness of the past along with the goodness that the future promises. There would be no winery maps or wineries on Highway 94 without the tireless efforts of Sarah Babine and Grant Spotts.

Ladies and Gentlemen will you please welcome Sarah Babine as she accepts their Trail Blazer Awards.

GREG MANESS: our second trail blazer dynamic duo couple have spent decades working together to accomplish many great things while giving back to the community, mentoring, and heavily promoting our emerging wine industry. Here is the heartwarming and amazing story of Jane Moore and Drum Macomber:

PJ MANESS:  Jane and Drum are both long-time residents and both started their wine educational careers learning with Dick Coangelo in the early 70’s thru classes offered thru Grossmont College. (While Jane passed with flying colors, there is a still rumor going round that Drum still hopes someday to pass the class) This class also included some of the rare first trips to Guadalupe Valley wine country in Mexico. Thru the City, El Cajon Community Development Association and the San Diego East County Chamber of Commerce they both have given endless hours volunteering, mentoring to various programs, non-profits and associations especially if there is wine involved. They annually organize bus tours and trips to support local wineries, constantly promoting and encouraging new wine growers to follow their dreams. On top of this, they are both Graduates of the Leadership in East County Program, Recipients of the Stoney Stone Award for Volunteerism and have accomplished a staggering amount of awards. In 2004 Drum was presented with the El Cajon Citizen of the year award.

We dug deep to find out that Jane actually began coordinated wine tastings fundraisers for Grossmont and the Cuyamaca College Foundation decades ago in the 1980’s. Her love for the vineyard and winery lifestyle has continued to grow and has tirelessly kept her pushing the envelope in hopes that one day the wineries would come. They are known as the energizer bunnies of winery promotions and they are well recognized assisting wineries across the county. We also found out that while both of them were working for the City of El Cajon decades ago they planned and organized the first official wine tasting in the city of El Cajon “A Toast to Music” offering not only Temecula wines, but SD East County new wines and wines from Mexico, South Africa and Romania. Nearly a decade ago both continued their wine promotional work helping to organize and coordinate the new East County Vintners group with meetings, memberships, food and wine pairings, gatherings and were the main co-organizer muscle behind the very first Trail Blazer Award Ceremony four years ago benefitting St Madeleines Sophie Centers new vineyard which inducted Dianne Jacob and other notables. The Trail Blazer Awards and many others that promote our emerging wine industry are in part due to their efforts shared with us all. Their efforts have led us to where we are all at today, here at the Toast to East County, yet another one of their visionary concept ideas.

GREG MANESS: While both have won dozens of amateur wine and liqueur making awards they remain diligent in helping and mentoring new vineyard growers and wine makers with their philosophy of dream big and big things some day will come.  To their massive Wednesday night winos weekly dinners promoting local vineyards and wineries for the past 16 years, to their Purple Friday wine tastings trips every year the day after thanksgiving, wedding pastor or holiday guest appearances as Vineyard Santa Claus, to their new Sons of Charity Organization they continue to inspire all of us. Ladies and Gentlemen, please give us a warm round of applause for El Cajon’s finest, Jane Moore and Drum Macomber, as they accept their well-deserved Trail Blazer Awards.

GREG MANESS: our third trail blazer dynamic duo couple planted their dreams and vines over 20 years ago in Ramona.  Their story reads like it could be the next Hollywood winery movie with amazing accomplishments.  For over twenty years now they have both inspired a generation of new wine growers to follow their lead in the North County. Here is the impressive and inspiring story of Marilyn and Steve Kahle.

PJ MANESS:  Steve and Marilyn fell in love in the 1960’s and were married in 1969 around the time when Napa Valley began growing into it’s infancy. They are the proud parents of three sons with family members who all assist them in vineyard/winery operations.

Steve is from Columbia, Missouri and has been a HAM Radio operator since 1966 and holds an electrical engineering degree from the University of Missouri, a MS in Computer Science from Kansas State University and retired after 37 years with a leading computer hardware/software developer. He loves everything about vineyards and currently holds an Educational Chair position for the San Diego County Vintners Association. We found out that his very first wine memory is of visiting the mushroom caves in Herman, Missouri’s now defunct wineries.

Marilyn is from St Louis, Missouri where she retired a long and wonderful career as a school district secretary and database administrator. She currently holds the position of Membership Chair and organizational secretary for none other than the San Diego County Vintners Association. This very important position allows her to coordinate guidance, information and leadership to new and existing members with County wide winery information.

Here is their time line: In 1995 they broke ground and planted Merlot (Black Bird in French) on one of the first modern day Ramona Vineyards. In 2001 they became original foundation members for the Ramona Valley Vineyards Association. In 2003 and 2004 they planted some of the first expansion vineyards of Cabernet Franc and Grenache Noir. In 2006 they helped the RVA streamline the new wine growing designation AVA for Ramona. In 2007 they became one of the earliest Ramona bonded wineries. From 2007 thru 2009 more estate vineyards were planted of Petit Verdot, Malbec, Cabernet Sauvignon, Alicante Bouschet, Montepulciano and Carmenere. During 2010 the County’s tiered winery ordinance was formulated and finalized in Ramona with their determined assistance by working side by side with County Representatives. The Boutique Wineries were born here at that time and the rest is simply history.

GREG MANESS: In 2010 their 2008 Reserve Cabernet Franc was voted best Cab Franc and best of show in the French American wine challenge between San Diego Alliance Francaise and the RVVA. In 2011 Woof and Rose became one of the first Boutique winery wine tasting areas in the county under the new ordinance.

These Days Woof and Rose winery produces 350 cases annually, mostly estate grown grapes, all from Ramona. Numerous gold, silver and bronze medals have been earned from local national international competitions including the San Francisco Chronicle, Finger Lakes International and Florida State Fair.  Their 2012 Reserve Merlot (BlackBird) was awarded a double gold and Best of Ramona Award at Toast of the Coast Competition. Their wines are frequently poured at numerous local charity events promoting themselves and the emerging San Diego County wine industry.  Ladies and gentlemen, like I told you they really could be the next Hollywood Vineyard Movie… May I please introduce to you all down the hill from Ramona, Marilyn and Steve Kahle of Woof and Rose Winery, now inducted as another one of our newest Trail Blazer Award Winners.