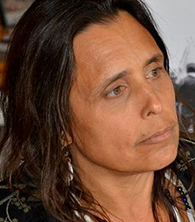 April 16, 2015 (San Diego) — Internationally acclaimed Native American and environmental activist Winona LaDuke will be the keynote speaker at San Diego State University’s GreenFest on Earth Day, April 22nd.  She will appear at Montezuma Hall in the Conrad Prebys Student Center at 4:30 p.m. The speech is free and open to the public.

LaDuke is the Executive Director of Honor the Earth, the largest Indigenous environmental organization in North America, and the author of 6 books. She is an Anishinaabe from the White Earth reservation in northern Minnesota. La Duke also served as Ralph Nader’s vice-presidential running mate on the Green Party ticket in the 1996 and 2000 presidential elections. In 2007, LaDuke was inducted into the National Women’s Hall of Fame.

She is also a cousin of East County Magazine co-founder Leon Thompson.

In 1994, Time magazine named her one of America’s fifty most promising leaders under age 40.  In 1997 LaDuke was named Ms. Magazine Woman of the Year. Other honors include the Reebok Human Rights Award, the Global Green Award, and the International Slow Food Award for working to protect wild rice and local biodiversity.

A rural development economist, she has testified at numerous forums as an expert witness, is a lead plaintiff in Honor the Earth v. Kerry, a lawsuit against the US State Department for an approval process of a tar2 sands pipeline, and is a leader in opposition to new extreme fossil fuels encroachments in North America.

She is a graduate of Harvard University, with advanced graduate work at MIT and Antioch University. With Honor the Earth, she works nationally and internationally on issues of climate change, renewable energy, sustainable development, food systems and environmental justice.

In her own community in Minnesota, she is the founder of the White Earth Land Recovery Project, one of the largest reservation based non-profit organizations in the country, working to to protect Indigenous plants and heritage foods from patenting and genetic engineering.

LaDuke’s books includeAll Our Relations, The Winona LaDuke Reader, Recovering the Sacred: the Power of Naming and Claiming, Food is Medicine: Recovering Traditional Foods to Heal the People and her latest, The Militarization of Indian Country. She has also penned a work of fiction, Last Standing Woman, and a children's book, In the Sugarbush.

GreenFest, presented by SDSU's Associated Students and SDSU's Enviro-Business Society, is a weeklong series of events to celebrate and encourage sustainability. There will be complimentary organic Oggi's pizza provided to all attendees.