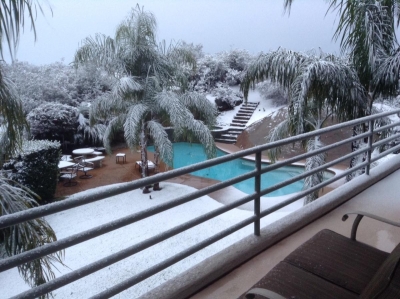 December 31, 2014 (San Diego’s East County) – A thick blanket of snow has fallen across much of  San Diego’s inland region, transforming the terrain into a winter wonderland this New Year’s Eve. Lindy Klengler sent photos taken at her Hidden Meadows home in Escondido at just 1700 feet elevation, showing snow around her swimming pool and atop palm trees. “Been here 22 years and never had this happen,” she says.

Melody Munoz and Donna Tisdale sent photos from Boulevard, where three to four inches of snow fell overnight and the temperature on New Year’s morning is a chilly 21 degrees. Snow has also blanketed Descanso and coated landmarks in Jacumba.

CHP reports that chains are required on Sunrise Highway to Laguna Mountain, on Highway 79 in Japatul and Highway 78 between Santa Ysabel and Julian.

Numerous accidents were reported including several big rigs reportedly trapped in the ice on westbound I-8 near Ribbonwood Road in Boulevard, CHP’s website indicated at 7:12 this morning. 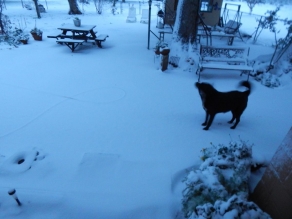 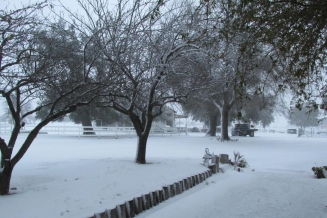 Photos: Above: Boulevard (taken by Donna Tisdale and Melody Munoz)

Below left and top of story:  Escondido (taken by Lindy Klengler) 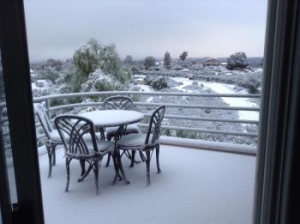 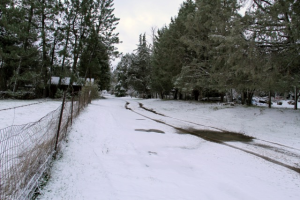 Below: Jacumba Peak with bathhouse in foreground and rattlesnake sculpture by Richard Breceda (taken by Danielle Cook) 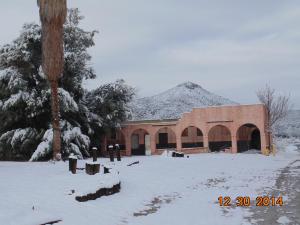 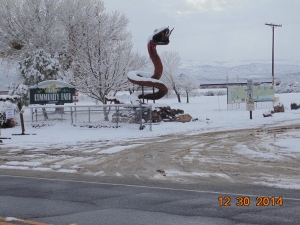 Thanks for the pics Lindy.