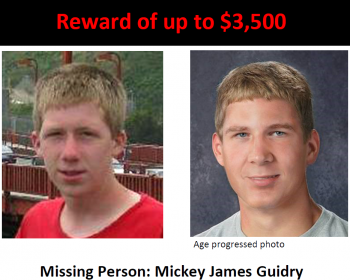 East County Magazine was the first media outlet to report  on the case nearly three weeks after  Mickey was last seen, when the Sheriff first informed media he was missing.  Our follow-up coverage also raised questions on early handling of the case by the department’s initial investigator, who assumed  Mickey had run away as he had done once before --until the Jeep he’d been driving was found disabled in the desert.

Subsequently, intensive searches were launched, but  Mickey Guidry was never found.  His mother later married Sergeant Don Parker,  who headed up the Sheriff’s Search and Rescue department and led those dedicated search efforts.

On the first anniversary of Mickey’s disappearance, we spoke with Sgt. Parker, who told us he continues working to find Guidry and several other missing kids. ““They vanish, but they’re not forgotten.”  He urged anyone with information to come forward.

Bill Knepper posted the following earlier this month, on one of our early stories about Mickey’s disappearance:  “I ran, happened onto this kid when on a solo Jeep trip. He was by himself and talking to a couple in a black TJ Jeep. The women passenger was trying to talk him into a ride out but he did not want to go the way he came in. He refused to go with me also as I was headed toward Fish Creek as they were.”

I contacted Knepper by phone and e-mail. He told me that  he had only recently heard that Mickey was missing , and posted on our sight after seeing  photos of the Jeep Cherokee and Mickey. He said he did not report his sighting to anyone at first, but came forward now to correct what he thinks may be errors in some assumptions made about the teen’s disappearance.

He says Mickey was “not carrying anything and was not far from the vehicle.” In an e-mail , he elaborated that he saw the Jeep not far from “Heart Attack Hill” when he saw the teen talking with the couple in a black Jeep. “He said he was alone and that his parents gave him the Jeep,” Knepperrecalled.

(In fact Mickey had taken the Jeep without his parents’ permission after his parents refused to allow him to go camping. He was not reported misisng at first because his mother assumed he would come home on his own and his father deployed for Afghanistan around the time Mickey left. Mickey visited a female friend from school, who was camping with her family in the desert. The girl's family has said they told Mickey to go home and gave him gas money, but he never made it back.)

Knepper says the woman he saw in the black Jeep was “trying to talk him into going with them, which was down through Fish Creek. He was reluctant to go back that way.  I was not exiting the desert that way, but via the Diablo drop off and Canyon Sin Ombre back to I-8. When I left he was still with them.”

He says the woman in the Jeep was “white, heavy set by 25 pounds and had long blond hair, late 30s early 40s. Her companion sat in the driver’s seat looking down as if reading. He was white with long,black hair, 6 inches long.I  thought this to be a bit unusual as most people you meet in the outback are pretty friendly.  Their Jeep was modestly equipped. No giant tires or huge lift. It had a soft top.”

Knepper says he frequently visits the desert, adding, “I have traveled nearly every dirt road” between his home in Spring Valley and Kingman ,Arizona, where he travels on business.

Knepper says he showed Mickey a map of where he was in relation to the possible exit points. “I saw him a quarter to a half mile from where his Jeep was, in the opposite direction of where he had been headed. It was before noon.” He adds that there were other people on the trail that day, but not many.

He recalls that Mickey’s family had told media that Mickey was very familiar with the desert, so it seemed odd that he would accidentally wind up with a thrashed Jeep in such a remote area.

Knepper, who restores Jeeps for a living, had the impression that the Jeep Mickey was driving had been “purposefully stuck.  Even with the right front disabled, the rear wheels would have provided some forward movement. He drove it into a hill/embankment and spun the wheels to dig holes.” Knepper thought the vehicle might be stolen.

Did Mickey leave with the couple in the black Jeep? Or,perhaps,someone else?

Knepper thinks Mickey may have set off on foot. He speculates, ”Because of previous maps of search areas that I saw on the net, I assume he exited north across an untraveled portion of the desert, which may have been the shortest route, but not the smartest choice…Hope this helps.”

Mickey’s mother has long contended that she believes her son is alive, somewhere, and hopes he will someday be found safe or contact her. The fact that intensive searches did not find any remains adds to the hope that Mickey made it out of the desert alive.

Mickey attended high school in San Marcos, where he was in the ROTC. He is white with blue eyes. His hair was sandy colored when he vanished. He had l braces on his teeth and acne on his face.  He was 5 feet 10 inches tall and weighed 155 pounds.  He may have been wearing denim jeans, blue high-top canvas shoes and possibly a dark blue hoodie.

He had spoken of traveling to Los Angeles and also has ties to Arkansas. His mother and a friend have said he did not do drugs and had not been in any recent trouble other than taking his parents’ Jeep and previously, their motorcycle without permission.  He sometimes used the nicknames Mike and Mikey.

In 2014,  an age-progressed photo showing what Mickey might look like today was released. Soon after, his  family came up with money to offer a $3,500 reward for any information that leads to finding Mickey.

But his fate remains unknown now, nearly seven years after he vanished.

If you have information regarding the whereabouts of Mickey James Guidry, please call the San Diego County Sheriff’s Homicide Detail at (858) 974-2321. Refer to Case Number: 09-073946. You can also call the Crime Stoppers anonymous tip line at (888) 580-8477. Anonymous email and text messages can be sent in via www.sdcrimestoppers.org.