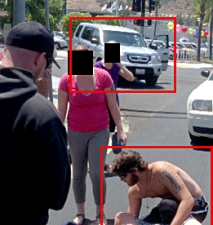 July 31, 2013 (Grantville) – A Grantville resident was struck by a car while crossing the street at the corner of Mission Gorge Road and Twain Avenue on Monday, July 8. Witness testimony is contradictory and eye-witnesses are being sought to help clarify the incident.

The pedestrian, a 42-year old woman and girlfriend of ECM reporter/photographer Ron Logan, was struck shortly before noon.

"My girlfriend was walking with her friend to a meeting. She was struck as she stepped off the curb to cross the street," said Logan. "When I got there she was already on the gurney. She was taken to Sharp Memorial and was released about three hours later having suffered a concussion, some short-term memory loss, a cut on her head, lots of scrapes and bruises, but nothing broken and no internal damage. She was amazingly fortunate."

"We really hope to find a witness who can clarify what happened," Logan said. "Her friend, who was visiting from Boston and who witnessed the accident, stated that the victim was hit, rolled up on the hood, struck the windshield and was sent airborne and landed 20 feet in front of the car. She took photos at the scene. There are a couple of people we would like to find. The first is the gentleman in the photo with brown hair, full beard and mustache, and a large bold tattoo covering the top half of his arm. He administered aid while the EMTs were arriving. We really want to thank him. The second person we hope to find is the driver of a silver Honda Pilot, 2009-2011, who you can see parked at the scene. We think these people may have seen the accident and can fill in the details. Although the driver and her passenger were questioned by SDPD, neither the man who helped out nor the driver of the Honda were questioned by investigators so we have no way to contact them."

If you witnessed the accident or have any information about this event, please call 619-269-1922 and leave your name and phone number. Someone will return the call to take your statement.