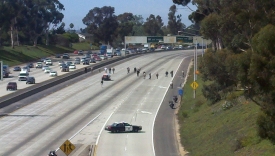 Nov 28, 2011 (San Diego’s East County)- Could the San Diego freeway shootings on October 3 have been prevented? A La Mesa resident has informed ECM that she witnessed the freeway shooting suspect, Enrique Ayon, draw his weapon and take aim—but was unable to reach 911. Her story raises serious concerns over mobile phone network reliability for reporting emergencies.

While heading north on the 805 freeway just north of Plaza Boulevard, Miriam Plotkin says she spotted the suspect’s vehicle with a gun pointed out of the window. In an exclusive interview, Plotkin told ECM that after seeing the suspect pull the gun, she immediately called 911--but was unable to get through.

“I pushed 911 quickly… only to be suddenly told ‘Sorry, emergency calls only.’ Well if seeing a gun pointed out of a window isn’t [an emergency], what is?” Plotkin asked.

She later clarified, "I did NOT talk to any operator. That was part of the PROBLEM. My phone was the one which merely flashed...EMERGENCY CALLS ONLY" when I tried and tried to dial 911. It allowed me to DIAL the 911 but the PHONE did not allow me to connect TO an operator."

Ayon went on to shoot at four vehicles on two San Diego freeways – Highway 805 and Interstate 5 – that day, leaving one person wounded.

“Today, I live with the fact that I could have prevented further trouble,” says Plotkin.

An AT&T wireless customer, she further recalls not being able to reach anyone via telephone for some time afterward.  She also tried 211, but says she could not get through, nor could she reach an AT&T operator.

ECM contacted AT&T for comment on the incident, but according to spokeswoman Anna Crowe, “We can’t speak to the specifics of the case without the customer information– there are so many variables, like coverage, topography, type of device – was there an issue with the device – the list goes on and on.”

But according to Plotkin, one of the issues pointed out by AT&T customer service immediately following the incident was that Plotkin’s phone was an older 2G model.

“AT&T merely stated that I had a 2G phone and that they no longer service them,” Plotkin informed ECM. “I had to upgrade to a 3G phone ASAP to make or receive any other calls, 911 included.”

“My phone was only one year old, I received no rational notice about this,” continued Plotkin.

Similar problems have been reported in other parts of the state. According to the Silicon Valley Mercury News, while upgrading its network to 3G, AT&T had to disconnect 2G/EDGE network in order to complete the migration. “What they fail to mention is that once the cell tower is update to 3G, it no longer supports the 2G/EDGE network,” the article stated.

Back in 2009 after the initial upgrade to 3G, AT&T 2G customers were getting the short end of the stick as the 2G signal was significantly weakened in order to enhance the 3G signal strength.

Crowe responded saying, “Just like all other wireless companies, we (AT&T) are re-allocating spectrum as more and more customers migrate to new technologies. AT&T continues to have robust 2G coverage and has not eliminated 2G at any cell site in San Diego County…the switch from 2G to 3G should not impact 911 calls.”

The Federal Communications Commission, the organization responsible for regulating wireless communications, has made a concerted effort to make sure an emergency call to 911 is always able to go through. In September, The commission introduced “Next Generation 911,” which would allow the public to send emergency communications to 911 public safety access points (PSAPs) via text, photos, videos, and data. The enhanced 911 would provide PSAPs with better information that would enable 911 responders to respond more quickly and effectively to emergencies.

“We must do the work to understand the ability of our communications infrastructure to provide service in the face of equipment or system failure, whatever the cause and whatever the platform,” said Jaime Barnett, Chief of Public Safety and Homeland Security Bureau.

Larry Landeros, spokesman for the California Patrol, offered this assurance. “We do our best to answer all 911 calls and have to deal with the folks making prank calls, too," he said, adding that while land line calls go to the local agency having jurisdiction, most cell phone calls are routed to CHP if they are near a freeway.  However some 911 cell calls are routed to whichever agency has jurisdiction based on where a call is made. He added that any gun sighting on a freeway is taken very seriously, since it could pose a threat both to the public as well as to law enforcement officers.

CORRECTION: Our original article stated that Ms. Plotkin called 911 "only to be told suddenly, `Sorry, emergency calls only.'" This was the phrase in her email to ECM. After publication, she clarified in a second email that "I did NOT talk to any operator. That was part of the PROBLEM. My phone was the one which merely flashed...EMERGENCY CALLS ONLY" when I tried and tried to dial 911. It allowed me to DIAL the 911 but the PHONE did not allow me to connect TO an operator."  We apologize for the confusion.

This was very informative. I have been reading your blog a lot over the past few days and it has earned a place in my bookmarks.
Welding Training Schools
Culinary Schools Training
Buy Tickets Center
Sports TV Live Streaming

I have volunteered with various law enforcement agencies in this county for over 40 years and am not buying the statement " ..only to be suddenly told ‘Sorry, emergency calls only.’.." No way a 9-1-1 operator would say anything like that if the caller CLEARLY explained someone was showing a firearm. Now, not being able to get through on a 9-1-1 cell call? Thats really possible. In the 3 times I have had to call 9-1-1, 2 cellular and one land line, over the past 10 years, I got put on hold. As I have a public service radio no problem for me. I hung up the phone and radioed dispatch. People in this new State of California must understand that if they insist on a nanny state where all their social needs are taken care of there may not be any money left over for such old fashioned ideas like having enough 9-1-1 dispatch operators available.

She has always been a stickler for truthfulness in the many years I've been acquainted with her.

Possibly an operator misunderstood what she was saying, but I do not doubt this witness's word.

What type of devices will the "next generation 911" support? Obviously cell phones, yet will iPads, iPods, etc. be included? Will 'older' 2g cell phones still work?

I recently used 911 service with an 'older' 2g ATT phone (with no contract service at the time) in east county and it worked quite well. Thank you...

Tech devices evolve so rapidly, I find it difficult to keep up! Think what society will be like in another 100 years!!!

I was unable to reach 911 myself a few months ago. I saw a car fire coming off I-8 onto Fuerte near Mt. Helix, but kept getting a busy signal when I dialed 911.