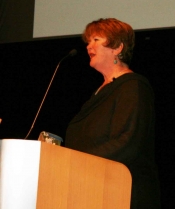 Councilwoman Marti Emerald’s office received a briefing from the Metro Arson Strike Team (MAST).  The Councilwoman, who represents City Heights, says, “We need witnesses to any of these fires or suspicious activity to come forward. So far, these arsonists have damaged cars and other property. But the next fire could harm or kill innocent people. These criminals must be stopped.”

The fires began in September. The most recent was last week, November 12. The public is encouraged to call 911 if they see any suspicious behavior. If you have any photos or video in the areas where the fires were set showing suspects, please call MAST at 619-236-6815.

The public is also asked to clear debris out of alleys near their homes or businesses so they do not become the next victim in this string of arson fires.