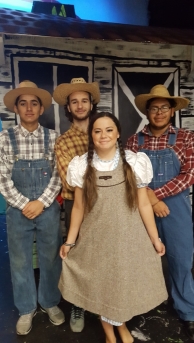 April 28, 2018 (El Cajon) -  Among the buildings when El Cajon Valley opened its doors in 1955 was The Little Theatre, a building that stands by itself. I've really grown to like the little building over the past few years. It's the only school I've been to with anything like this. In the next year or two it will be demolished for a bigger and better (in some views), events center to house band, drama and Associated Student Body (ASB).

If you have performed in this theatre, you may want to come out to a show soon. Introduce your children or grandchildren to a place of fond memories which will not be around much longer.

The Wizard of Oz, written by Frank L. Baum and directed by James Austin, is one of the most-seen movies ever. In this stage rendition, opening night had a lot going on. Like the Scarecrow, Tinman, and Cowardly Lion, these students showed brains, heart and courage: brains to think out spur of the moment adversity, heart to pull together as a family and see the show through to the end, and courage to for being on stage in the first place. 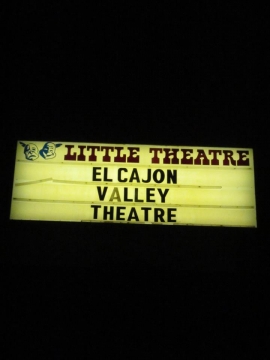 The five main characters everyone identifies with were cast perfectly, shining when they were in the spotlight. Annalea Larman as Dorothy brought her beautiful voice to the stage. Ewan Sabri plays Scarecrow; he brings us playfulness. Sivan Kawany plays the Tinman; he has talent for dancing with two great dances, one when Dorothy meets him and the jitterbug. John Flores as The Cowardly Lion brings the humor, making the audience laugh repeatedly. Olivia Skubaki, plays The Wicked Witch. Her strong suit is her witch’s cackle--a fabulous laugh.

My favorite scenes were when Dorothy met each of her three traveling companions. The show also features a marvelous wizard prop:  the face in front of the curtain.

Show some heart and come support high school theatre. There is always room for a few more.

The Wizard of Oz