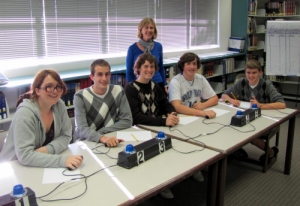 In Junior Varsity Academic League action, two previously undefeated titans took each other on: the Granite Hills Eagles coached by Rachel McCurry went up against the host West Hills Wolfpack coached by Jan Hedeline. The match started off with the score being very close. Then West Hills built up a seemingly insurmountable lead. 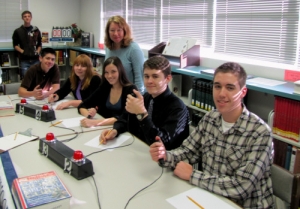 With about seven minutes left, both teams substituted and Granite Hills started coming on strong. They finished the match with 57 points to 77 points for the Wolfpack. Moderator Brian Andersen commented that if the match had gone on longer than the allotted 25 minutes, it may very well have been closer. He also noted that both teams only answered one toss-up question incorrectly.

The Granite Hills Eagles were led by CaptainTaelor Getz. She had strong support from Connor Nerat and Alex Dow along with starters Thomas Rainey, Madison Burgess and Jesus Mendoza. 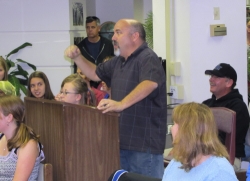 The standing room only crowd of approximately 60 people gave a standing ovation at the end of the match for two teams of bright, competitive young people. It was truly too bad that one squad had to lose at all. Representative of all of the Academic Leagues teams, varsity and junior varsity, they are all real winners!

In Varsity competition, Moderator David Landry reported that the Santana Sultans, coached by Brooke Crocker, continued their undefeated season to date with a win over host Monte Vista Monarchs coached by David Shrin.

Moderator Steve Montgomery indicated that the Steele Canyon, coached by Betty Jensen, at Valhalla, coached by Peggy Ormsby, match was very close up until the end when the Cougars pulled ahead of the Norsemen. Similarly, Moderator Michelle Tribble reported that the El Capitan (coach Dena Rosenberger) at El Cajon (coach James Austin) match was decided in the last 4 minutes with the Vaqueros winning over the Braves.

Moderator Mark Gabler indicated that the GUHSD Superintendent Robert Collins was at the Helix vs. Grossmont match enjoying the activity as well as taking pictures. Having participated in this kind of academic activity in Los Angeles before coming over to the GUHSD, he has been a strong supporter of Academic League.