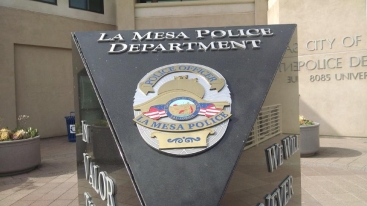 By Miriam Raftery
October 3, 2019 (La Mesa) – Shortly after midnight, La Mesa Police officers called to the scene of a reported disabled vehicle blocking the roadway on the 70th Street overpass above I-8 near Alvarado Road discovered the driver inside, unresponsive with no pulse. Officers administered CPR until paramedics arrived and took over.  The woman, 67, was taken to a hospital, where she was pronounced dead.
A preliminary investigation by LMPD concludes the driver was traveling north on 70th when she passed through the intersection and for unknown reasons, crossed into southbound traffic lanes and struck a curb.  She drove across the sidewalk and struck a cement wall on the overpass.
She was not wearing her seatbelt at the time of the collision.
The driver’s identification is being withheld, pending notification of next of kin, by the Medical Examiner\s office.
The La Mesa Police Traffic Division is actively investigating the incident. The public is encouraged to call the La Mesa Police Department at (619) 667-1400 if they have any information regarding this incident.