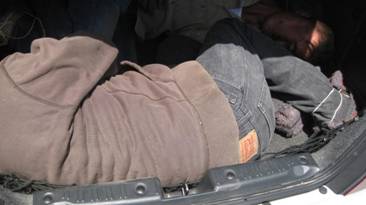 April 28, 2016 (Pine Valley) -- .S. Border Patrol agents arrested a woman at the Interstate 8 checkpoint Tuesday for smuggling two Mexican nationals inside the trunk of her car.

At approximately 1 p.m., a 19-year-old female arrived at the checkpoint near Pine Valley driving a 2003 Acura TL. Agents referred the woman for a secondary inspection and, when they opened the trunk of the Acura, they discovered two men inside.  The men had been in the trunk for an extended period and were disoriented by the daylight and had difficulty speaking.  After providing aid to the men, agents determined both were Mexican nationals illegally present in the U.S.

Agents arrested the female driver, who faces federal charges for human smuggling. The two Mexican nationals were transported to a nearby Border Patrol station for processing.

Campo Patrol Agent in Charge David BeMiller said, “Due to the extraordinary vigilance of the Campo Station agents, many smugglers have tried and failed to get their human cargo through the Border Patrol checkpoint on Interstate 8.”

Since October 1, 2015, Border Patrol agents in San Diego Sector have intercepted 14,449 individuals who attempted to illegally enter the U.S.