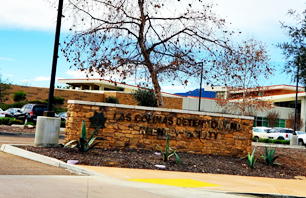 July 3, 2022 (Santee) – Erica Wahlberg, 40, died in a hospital, where she was admitted June 28 after suffering medical distress at the Las Colinas Detention facility in Santee.

A state audit found 185 deaths of people in custody in San Diego County from 2006 through 2020, the most of any major California County; another 18 died in 2021 and 10 so far this year. A state audit recommended numerous reforms and legislative action. The Sheriff’s department has indicated it has implemented some of those reforms and a bill pending by Assemblywoman Akilah Weber would mandate additional reforms.

Wahlberg was arrested for an outstanding drug warrant on June 27. She was initially taken to the Vista Detention Facility, but was transferred to Las Colinas on June 28, arriving around 9:30 p.m. (The Vista facility transfers female arrestees to Las Colinas if they are unable or ineligible to pay bail.)

Shortly before 4 a.m. on June 28, Wahlberg showed signs of medical distress and was sent to a local hospital for treatment, where she died on July 2 juts after 5 a.m.

“Every death is a tragedy and the San Diego County Sheriff’s Department is sympathetic to Miss Wahlberg’s family and loved ones.  A Sheriff's Family Liaison Officer has been assigned and the family has been notified of her passing,” says Lieutenant Chris Steffen.

The Sheriff's Homicide Unit responded to investigate the incident, as is customary for all in-custody deaths.  An autopsy is preliminarily scheduled for today.

The Citizens' Law Enforcement Review Board (CLERB) was notified of the death.  Further information will be released as it becomes available.