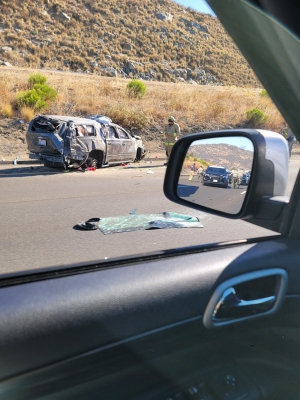 July 15, 2022 (Alpine) – A Lakeside woman, 35, died at the scene of a collision this morning on Interstate 8-west in Alpine. Two children, ages 3 and 9, in her vehicle sustained moderate injuries, says Officer Travis Garrow with the California Highway Patrol.

The woman was driving a Chevrolet Tahoe on I-8 westbound just west of Tavern Road when her vehicle overturned and rolled down the center dirt embankment onto eastbound I-8, where it struck a Mazda-3 traveling eastbound. The Mazda was driven by an El Cajon woman, 44, who was not injured.

The Chevrolet driver, who was not wearing a seatbelt, was ejected from the vehicle and died at the scene. The children, who were wearing seatbelts, were transported to Rady’s Children’s Hospital in San Diego for treatment.

“At this point in the investigation, drugs or alcohol do not appear to have been a factor in this crash,” says Officer Garrow.

The identity of the victim has not been released, pending notification of family by the Medical Examiner. The investigation is ongoing.