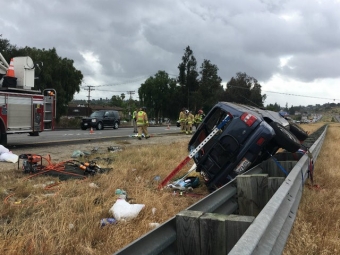 May 1, 2018 (Spring Valley) – Maria Cristina Duran, a 35-year-old mother from Spring Valley, was driving a blue Kia SUV westbound on State Route 94 this morning near the Kenwood Drive exit when she swerved to avoid hitting a Honda Civic that had pulled in front of her. She crashed onto the center divide and the vehicle overturned, CHP reports.

Her son, 17, and daughter, 12, both passengers in the Kia, were transported to a hospital with minor injuries.

The Honda Civic, driven by a 23-year-old man, entered the freeway at Kenwood Drive and merged in front of the Kia.  The Honda driver was not injured    .

Alcohol and drugs are not considered factors in the collision.

The crash, which occurred shortly after 7:30 a.m., resulted in closure of a lane on the highway during the investigation.