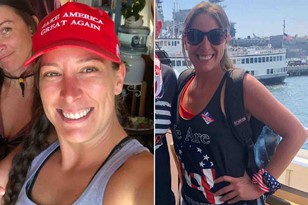 January 7, 2021 (Spring Valley) – A woman shot and killed by police while breaking into the Speaker's gallery inside the U.S. Capitol during yesterday’s insurrection has been identified as Ashli Babbitt. An Air Force veteran describe by KUSI as a “high level security officer” during her military service, Babbitt was the CEO of Fowler’s Pool Service & Supply in Spring Valley, the San Diego Union-Tribune reports.  10 News reports that she grew up in Lakeside.

Although some sites have described her as an "unarmed protester," her documented actions went far beyond Constitutionally protected protest activities. The New York Post has published video showing the moment when Babbitt was shot while climbing through a broken window in the Capitol, attempting to illegally access the House chamber where Congressional members were holding a hearing on certifying the Electoral College votes from the presidential election.  (Warning: graphic content).

The video shows armed officers rushing up stairs into a crowd of insurrectionists intent on disrupting the peaceful transfer of power process, many wearing MAGA hats as they attempt to break down a barricaded set of doors. The crowd lifted up Babbitt, who was wearing a backpack with a flag as she attempted to climb through a broken window in one of the doors, when she was shot by law enforcement.

Her husband told KUSI that Babbitt was a strong supporter of President Donald Trump, who had urged his supporters in a rally outside the White House yesterday morning to march to the Capitol and protest the certification of electors. Thousands mobbed the Capitol, terrorizing lawmakers forced to flee or shelter in place. Some looted the building, stealing objects including the speaker’s podium.

The BBC reports that four people were killed and 14 police officers were injured. At least 52 people have been arrested to date and the FBI is requesting tips on others involved in the insurrection.

Congress later reconvened to certify President-Elect Joe Biden as winner of the election. In the Senate,  93 of 100 Senators cast votes in favor of certification and many prominent Republican leaders denounced the President for fueling conspiracy theories and inciting violence. The House also voted to uphold the election results, though over 100 Congressional members objected to certification of one or more states, including Congressman Darrell Issa (R-San Diego), who objected to the Arizona results.

Babbitt’s ex-husband, Timothy McEntee, called her a “wonderful woman with a big heart and a strong mind,” saying she “loved America with all her heart.”

Before the protest, she reportedly tweeted, “Nothing will stop us now.”

CBS affiliate WUSA reports that a protester who witnessed the shooting said law enforcement officers warned the crowd to “get back, get down, get out of the way.” He said Babbitt didn’t heed the warning and was shot, falling back onto the witness.

Washington Metropolitan Police Chief Robert Contee told reporters during a press conference that Babbitt was transported to a hospital, where despite life-saving efforts, she was pronounced dead. Times of San Diego reports that the shooting is being investigated by the department’s internal affairs division.

If a free people come to see that the balloting system has become utterly corrupted what recourse do we have? I for one have absolutely no confidence in the balloting system any longer and no hope that it will ever be fixed under a democrat controlled government...they have everything to lose by making trustworthy. We need to get back to a paper ballot and voter I.D.; this is the only way we can have ANY confidence in the ballot. I fear our Free Republic is doomed; somewhat glad that I'm not long for this world so I don't have to live to see the end. God Bless the United States, God Bless President Trump.

Is for people to address their state legislatures or secretaries of state if they believe their votes are insecure.

I actually did this some years back and helped persuade Secretary of State Bowen in California to decertify touchscreen paperless Diebold voting machines here, which had shown to be easy to tamper with.

But once a voting system is adopted and used bya  state in a nationwide election, it is NOT appropriate to demand that the entire election be overturned, nor to attack our nation's capitol with volence, guns, bombs, etc. That is insurrection.  I did not demand that prior election results be thrown out or run around threatening people when I had evidence of a problem, but did work to get it corrected before future elections.

Note that there is absolutely NO evidence of any significant fraud in this presidential election. The president and his lawyers lied.  All 50 secretaries of state and dozens of judges have affirmed that no evidence of any significant fraud has been found. (Georgia found two records of dead people voting, not "thousands" as Trump falsely claimed in his bullying call to the GA Sec. of State, for example.)

I do however agree with you that all elections should have paper ballots, which can be verified and audited if necessary.  Counting should be videotaped with observers from both parties. This was done most if not all places this election but again, the specific rules are set by each state and Congress by law cannot dictate the fine points on this to the states.

Well Trump does not vote that way, He mails in a ballot every year. There ARE paper ballots, some have been counted many times. Why do you believe these lies? Utterly corrupted?

There are thousands of people dead daily from a global pandemic, you think we all should  go to polling booth on the same day? Sorry bro, its a big lie and you are too gullible.

Her final act was to violently rebel against the country and Constitution she once swore an oath to protect. This was the death of a person without a country, and without honor.