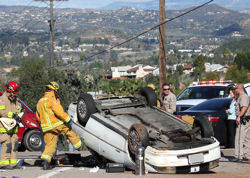 February 17, 2012 (Lakeside) – Firefighters from El Cajon and Lakeside Fire Departments utilized the jaws of life to free an injured motorist in a rollover accident on Aurora Drive.  The crash occurred around 2:30 p.m. yesterday.  The female driver was traveling west on Aurora when she failed to slow down at a sharp corner and hit a curb, causing her vehicle to flip over, according to the CHP.

ECM photographer Billy Ortiz spoke with a CHP officer at the scene, who said the woman was conscious and talking, however he did not know the extent of her injuries.

She's still lucky to survive from the accident although the pain she's feeling right now will be too much. I am hoping for her immediate recovery. More and more vehicular accidents have been listed everyday. So to avoid such incident we should be more careful in driving. Extreme NO