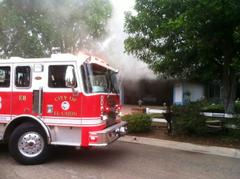 September 25, 2011 (El Cajon) -- An elderly woman and her dog have been displaced from their home following an early morning fire.

At 7:20 a.m., Heartland Fire & Rescue in El Cajon responded to reports of a structure fire. As fire crews arrived on scene, heavy smoke and flames were seen coming from a single story family home located at 1197 Lostinda Street.

El Cajon Firefighters, with assistance from the San Miguel Fire Protection District, had the fire knocked down in ten minutes. Quick response limited the fire damage to the home, although there was heavy smoke damage throughout the structure.

One elderly female was transported to UCSD with burn injuries and smoke inhalation. One dog named Scooby 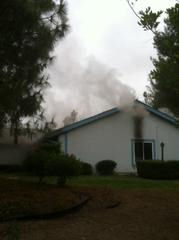 was taken to a veterinary hospital with possible smoke inhalation. The fire leaves one adult and one dog displaced.

The cause of the fire is now under investigation. Damage estimates have not yet been determined.