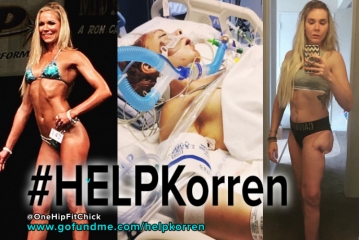 April 7, 2018 (Lakeside) – “My life changed forever during the early morning hours on Memorial Day, May 30, 2017,” says Korren Knapp Grada.  That’s when she suffered horrific injuries after being struck by two hit-and-run vehicles in I-8 near the Lake Jennings exit in Lakeside.

How she got there remains a mystery, though she believes she was drugged by a man and was seeking to escape harm when she scaled a fence onto the freeway.

She’s shared her story with East County Magazine in hopes that someone can shed light on what happened, perhaps recognizing strangers in photos taken on her cell phone the night before. She also hopes to thank a good Samaritan who stopped and saved her life.

Most of all, she needs help with staggering medical bills for multiple surgeries needed to save her life and help her on her long road to healing; you can donate at https://www.gofundme.com/helpkorren.

Before that fateful night, Grada was a bodybuilder, NPC bikini athlete/model and fitness enthusiast who also worked as a tattoo apprentice and had been a senior art director at advertising agencies. “I believe, and my doctors have also noted that my muscle mass at the time was likely one of the reasons I survived this awful accident,” she told EMC.  You can follow her account of her recovery on Instagram @onehipfitchick.

Originally from New York, she had moved to San Diego in 2016, a city she believed was safer. She hopes her ordeal will warn others that “this could have happened to any young woman that was trying to escape a dangerous situation.”

She’d gone out to the Gaslamp with a friend, where she ordered a drink. She remembers talking with a man and believes he slipped a drug into her drink.  “I rem 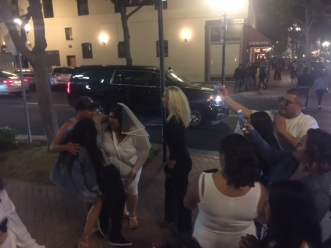 ember drinking the drink and then nothing else,” she said, then clarified that she does have two fleeting memories of later that night.  One is a Mediterranean restaurant, perhaps blue in color, with a hookah.  The other is a white house that was being remodeled or reconstructed.

“I had pictures on my phone from that night with some Asian girls….I have no idea who the were, or where I was,” she says, adding that based on clothing in the photos, it could have been a bridal party since one woman is wearing a veil and white dress.  (See several of the photos, left and right). 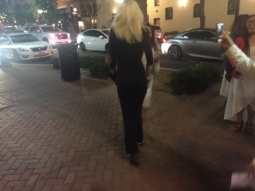 Another photo shows Grada, dressed in black, from behind.

She has no memory of how she wound up in  East County. But she has since learned, “I had my belongings on one side of nine foot fence and I had jumped over it. I think I was trying to get help. I think he (the man from the bar) was trying to rape me or something.”

At 4:45 a.m., Grada, who was 29 years old at the time, was struck by an unknown vehicle that knocked her to the pavement. A big-rig truck driver told California Highway Patrol that he witnessed a second vehicle strike her, then flee the scene. He described it as a black Ford disesel lifited F-250 or F-350.  Both reportedly struck her head on. Neither driver has ever been found. 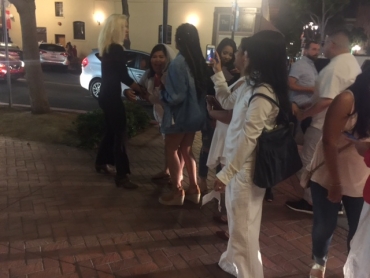 e to know who the tractor truck driver was, as he saved my life!” Grada says. “I owe him everything.”

On a GoFundMe page, she explains that the truck driver pulled his truck horizontal on the highway, blocking oncoming traffic.  “He was a guardian angel. He called 911, scraped my nearly dead body off of the asphalt, and kept me breathing until the ambulance arrived.” She hopes to locate and thank the good Samaritan, whose identity she doesn’t know.

Kevin Pearlstein with the CHP stated at the time that it was unknown if the victim would survive her serious injuries. She was taken by ambulance to Sharp Memorial Hospital.

Two weeks later, she says she woke up in a coma in the intensive care unit (ICU).  “I couldn’t move my limbs, but could think, see, and speak. It was a miracle that I didn’t have any brain damage,” she says.

Her injuries were horrific.  According to her account, which includes many graphic photos of her injuries, her right leg was immobile.  Her left elbow was torn open. Her bladder was detached.  “My stomach, chest and head were covered with stitches. By this time, I had been through 14 surgeries and there were more on the way,” she wrote.

Later she was transferred to a rehab facility with a catheter in place; still unable to put weight on her leg. When she tried taking her first step “the pain was unimaginable.”  A wound wasn’t healing. The catheter fell out and she developed a massive infection, requiring emergency surgery, 80 new staples, and  a blood transfusion. “My bladder was creating tunnels in my legs as a means to expel urine,” she recalls. 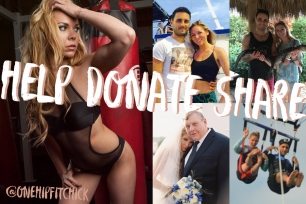 Next, she suffered a blood clot in her right hip. “I broke out in tears…literally overnight, I was a thrombosis survivor,” she wrote.  Her hip was so badly damaged that she’s also faced hip replacement surgery and bladder surgery on the horizon.

Through the ordeal, her teeth have rotted and discolored. She’s lost two teeth and had over $18,000 in dental care not covered by insurance. She says she still needs a root canal and implants.

She hopes to raise funds on her GoFundMe page to help pay for her surgeries and dental care, among other costs.

“Anything you can give would help out. God bless you and always believe in miracles—I am (almost) a walking one,” she concludes.