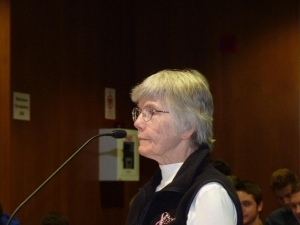 In lively meeting, Council also hears ideas from the public ranging from creating a city-owned utility district to bringing the Chargers to East County

March 10, 2015 (El Cajon ) – At Tuesday’s El Cajon Council meeting, two women  spoke out to voice outrage that an El Cajon Police sergeant accused of sending naked photos of himself to women officers remains on the force.   The Sergeant. Richard Gonsalves, was demoted to officer and the city now faces a lawsuit filed by a female officer who alleges sexual harassment and discrimination. 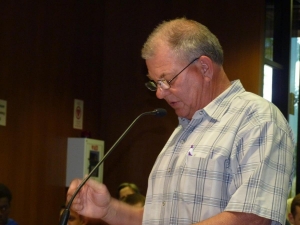 A second speaker, Gloria Martes, mother of two daughters in El Cajon, also called for action. “There needs to be an independent investigation,” she stated, noting that if the lawsuit is successful, taxpayers will pay and the city is assuming liability for any future actions by keeping the former sergeant on the force. “Harassment in the work place should not be tolerated,” she said.

City Attorney Morgan Foley told Council that “all proper procedures were followed” adding that the city cannot comment further due to the pending litigation.

Other speakers offered some positive and creative ideas for the city to consider.

Robert Germann with Citizens Against Gillespie Expansion (CAGE) submitted a proposal to build a Chargers Stadium on  a portion of the land at Gillespie Field. His plan would allow one runway to remain but would create an entertainment-sports complex. Instead of an Aerotropolis proposed by others, he suggested a “Chargers-tropolis” that could potentially bring a Super Bowl or World Cup Soccer match to East County.

“El Cajon is still the poorest city in the county,” he said. We have an opportunity here.”

Councilman Ambrose noted that El Cajon doesn’t own the airport, which is owned by the County.  But Germann noted that Council has been influential with Supervisors in the past on another airport issue, successfully getting a measure passed to require background checks of foreign flight students.

Mayor Wells asked city staff to analyze the proposal and promised to get back to Germann and “tell you what we can and can’t do,” adding, “I know that everyone here would love to see the Chargers stay in the San Diego area.”

Ray Lutz with Citizens Oversight suggested that the city could make a lot of money if it would become its own municipal power network.  The city could get its power at cost and make money offering power to others.  Lutz said that in Anaheim, which has its own power network, electricity costs $165 per megawatt hour, while San Diego’s pay more than double that rate at $374 per megawatt hour, with SDG&E reaping the profits.

Mayor Wells asked the City Manager to brief him on the idea, adding, “If there is a way we can save money, I’m all for that.”

Earlier in the meeting, Lutz criticized the city however for approving community block grants for the East County Transitional Living Center’s homeless programs because the organizations primary goal is “to convert people to Christianity.”

But Mayor Wells and other Council members praised the program for successfully helping many homeless people to transition off the streets and into jobs, noting that the center does offer some non-religious options to help the homeless get off the streets, though those options are only short-term.

Councilman Kendrick announced that a court ruling has upheld the city’s deemed approve ordinance to restrict alcohol sales off-site.  Groups from the alcohol industry that filed the suits have opted not to appeal, so the ruling stands.

Council approved 5-0 to accept bids for renovations on the East County Performing Arts Center, moving forward on long-awaited plans to reopening the theater closed for more than five years.

Hilde Krauss with the El Cajon Library announced a multi-cultural family festival April 11 that will have music, food, a K-9 demonstration, fire engine tours and more. Other upcoming events planned include a Persian New Year celebration and a small business workshop.

Mayor Wells concluded, “I’ll be there – and I’ll see you there.”