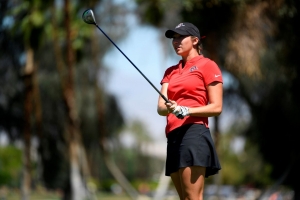 Carpinelli was the lone competitor in the 92-player field to finish below par for the tournament, where she posted a combined 1-under 215 while battling inclement weather on the par-72, 6,494-yard course layout.

With her placement, the Aztec sophomore claimed the first individual title of her career, winning by three strokes over UNLV’s Elizabeth Prior and Arizona State’s Alessandra Fanali, who tied for second at 2-over 218.

Collectively, SDSU climbed two places into the fifth position on the strength of a final-round 8-over 296, completing the 54-hole event with an aggregate 36-over 900. As a result, the Aztecs finished the week four strokes behind fourth-place Iowa State (+32) and six shots behind host Arizona (+30), which landed in the third spot.

Carpinelli began the day in a tie for fifth, but set the tone early with a birdie on her opening hole at the par-5, 475-yard No. 5, before following with five consecutive pars. The Swiss native experienced a pair of hiccups with bogeys on the par-4 11th and the par-3 third, but otherwise played spot-free golf the rest of the way, draining three additional birdies, including back-to-back conversions on the 16th and 17th to help ascent on the leaderboard.

In addition, Sara Kjellker (Hollviken, Sweden) displayed upward mobility on Tuesday, vaulting 15 places into a tie for 16th at 9-over 225 after shooting a 72. The SDSU sophomore offset one bogey with a birdie on the par-3, 134-yard No. 15 while notching a team-high 16 pars. With her effort, Kjellker completed her third top-20 placement of the season.

Kitty Tam (Hong Kong, China) was not as fortunate, however, slipping 11 places into a tie for 22nd at 11-over 227 after a final-round struggle of 79. The Aztec senior sank a birdie of her own at No. 15, but experienced a rash of six bogeys, as well as a double bogey on the par-5 14th. Despite the tribulations, Tam still recorded her highest finish in a varsity start for the Scarlet and Black.

Elsewhere, Fernanda Escauriza (Asunción, Paraguay) rebounded somewhat from a calamitous second-round, shooting a 76 to climb nine places into a tie for 55th at 19-over 235. The SDSU junior shook off a double bogey on her first hole at the par-3 seventh with a steady diet of 13 pars, which helped ease the sting of three other bogeys.

The Aztec starting five also featured senior Daniela Anastasi (La Jolla, Calif.), who saved her best for last on Tuesday, carding a 78 to move up eight spots into a tie for 77th at 26-over 242. Among the highlights of her round were birdies at the second and fifth greens, along with 11 pars.

Despite the adverse conditions, Arizona State shot a 2-under 286 over the final 18 holes, climbing four places in the standings to win the team title with a combined 22-over 886, while Oregon (+29) edged Arizona (+30) for the runner-up spot.

San Diego State will have two weeks to prepare for its lone home tournament of the season at the Lamkin Invitational, scheduled for March 25-27 at The Farms Golf Club in Rancho Santa Fe, Calif.