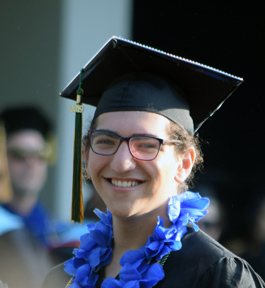 June 7, 2019 (El Cajon) -  Thanks to my grandson Shor Masori graduating from three different schools this semester, I recently had the opportunity to listen to several remarkable young women who respectively were speakers at the ceremonies at Community Jewish High School,  Grossmont Middle College High School, and Grossmont College.

Shor has been getting a lot of attention recently for simultaneously completing his high school and community college studies. He received his Associate of Arts degree from Grossmont College on June 5, one day before receiving his diploma on June 6 from Grossmont Middle College High School.  Diane Bell of the San Diego Union-Tribune devoted part of a column to that temporal anomaly, prompting KUSI to invite both Shor and David Napoleon, principal of the middle college high school program, to explain to viewers how students like Shor can get such a head start on their university studies.  The short answer is that the high school maintains two separate classrooms on the Grossmont College campus. It requires its 11th and 12th grade students to take a mixture of high school and college classes as part of their weekly schedules.   Shor parlayed Advanced Placement Tests from high school with sufficient credits from college classes to meet all the requirements for an A.A. degree. 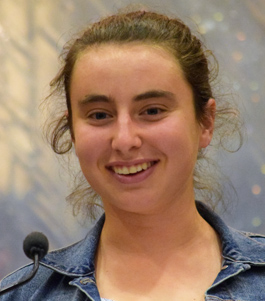 But that story has been told elsewhere.  This column is about three young women from diverse ethnic and racial backgrounds whose words at the three graduation ceremonies provide us with a snapshot of the people who strive for success in their generation.

Maya Rozenshteyn, whose parents were immigrants to the United States from the former Soviet Union, spoke on May 28 at Community Jewish High, which meets on Tuesday nights at Temple Emanu-El in San Diego, drawing students not only from that Reform congregation but also from Tifereth Israel Synagogue, a Conservative congregation, as well as some from other families living in the same general neighborhood.

During the five years between their b’nai mitzvah and their graduation from secular high schools, CJH students attend two classes on Tuesday nights, one being a required Jewish study, the other being an elective of some sort.  The required study covers such topics as Jewish history and contemporary issues, with wide-ranging discussions being encouraged.

Rozenshteyn, who heads for Princeton University this fall, said Community Jewish High was a valuable experience because “here I found an extremely supportive community of people who love to learn, who love to sing, draw, and cook, and who, in typical Jewish fashion, love to argue.  And that is something that I love.  In regular high school (she attended Patrick Henry High School), there seems to be an emphasis on grades over learning. Here, however, there are no grades. … You don’t see students trying to out-compete each other to get into college; you see them helping each other deal with personal problems.” 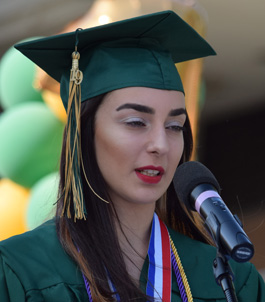 Also, she said, at CJH, students may be found “discussing issues for no other reason than they generally care about them, and that is an extremely important thing.”

The speaker at Grossmont Middle College High School in El Cajon was Angelina Anwar Jajo, whose Chaldean family immigrated to the United States from Iraq.  Yes, I know that I’m taking her speech out of chronological order, but I wanted to work my way up from the smallest to the largest group of students among the three graduation ceremonies.

Jajo, like Shor, will be attending the University of California at Berkeley in the fall.  Noting that graduating high school students frequently are asked what career they plan to follow, she commented, “You do not need to know your path in life in order to establish who you are.  Keeping an open mind to everything is just as honorable as someone who is able to state their interest and major because at some point, they didn’t know either, and they just got a little lucky figuring it out.”

Jajo appealed to those in the Grossmont Middle College High School audience to “support those who may not know their plans immediately.  Support the open mind that they must hold strong in order not to succumb into whatever they feel pressured into doing.”   To her fellow graduates, she offered this advice:  “Don’t be led astray from who you are.  This is your life.  This is all you can and will ever be.  Make the most of yourself.” 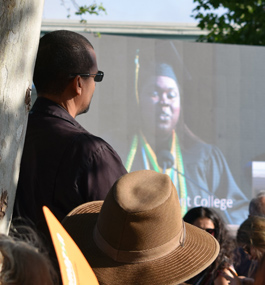 The Grossmont College graduation featured Shakur Collins, who will be continuing her education at the University of California San Diego.  Hers was a story of perseverance.  Back in 2015, as one of the top graduates of Serra High School in San Diego, she was admitted to 14 different universities before deciding upon the University of California at Irvine.  But when Collins, who is African-American, attended her UC Irvine orientation, “life changed forever.”  She became extremely ill. “Doctors thought it was an extreme migraine,” but after four months in and out of hospitals, “I was informed that the build-up of cerebral sinuses in my head had led to the permanent loss of most of my vision.”

The condition left her unable to “see well enough to write my own name on a piece of paper,” she related.  “As a result, I was forced to unenroll from UC Irvine.  I lost all of my scholarships, my motivation, and my vital sense of independence. I felt defeated, alone, lost, and just empty inside.  Life was dark but eventually a little spark of hope lit the way.  With the help of my lovely family, I eventually enrolled here in Grossmont College back in January 2016.”

“As time went on,” she added, “I realized that I had a decision to make: I could either stay in this dark, broken place or I could use this opportunity as my second chance to pick up the pieces of my life and rebuild.”

The straight-A student offered these observations to her fellow graduates.  “When the going gets tough, you don’t fold; you adapt. … Life is going to beat you up, tear you down, and test you in ways that are unimaginable.  Life is going to be hard, but it is also going to be fulfilling.  You just have to keep going.  Be resilient and continue forward unapologetically and with great fervor because you are all capable!”

Rozenshteyn, Jajo, Collins, and, yes, Masori, too,  are serious, intelligent, motivated, and capable.  Don’t believe the negatives you might hear about the generation born around the turn of the millennium.  I can’t help but believe that when they take the leadership positions in our society, we’ll be very well served indeed.