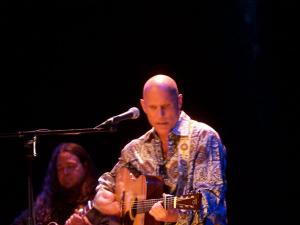 November 23, 2014  (Poway)--A sold-out crowd of tie-dye wearing, long-haired hippies with flowers in their hair descended on the Poway Center for the Performing Arts Saturday night to revisit Woodstock, the celebrated concert that changed the music world.  The music and an enthusiastic crowd rekindled the spirit of the original Woodstock, which I attended back in 1969.

Local musicians including Jeff Berkeley,  Eve Selis and former Padres’ Tim Flannery joined The Back to the Garden Band to re-create the iconic three-day outdoor concert that rocked the world in '69 with such greats as Jimi Hendrix, Janis Joplin, the Who, Sly Stone, Joe Cocker, Crosby Stills Nash & Young, Jefferson Airplane, Credence Clearwater Revival, Santana and Richie Havens, to name a few. 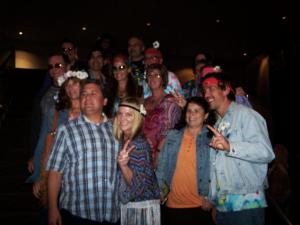 The response from the crowd was amazing.  Every seat was filled with foot-stomping, hand-clapping, sing-along rockers, mostly middle-aged.  There were more than a few gray-hairs in the audience who came from all over --including rock fans Derek and Nancy Cassidy from La Jolla, Xavier Martinez from Escondido, and Ariele Brooks from Crest.

The crowd had a visible effect on the Band as enthusiasm uplifted the musicians and brought out spirited performances.  At one point the keyboardist seemed reticent until the crowd started clapping encouragement and singing along.  Clearly the spirit of Woodstock was aroused.

On the backdrop screen was a recreation of the psychedelic liquid light show made popular in the Avalon Ballroom in San Francisco when the Jefferson Airplane played White Rabbit.  Eve Selis brought the crowd to its feet with her rendition and the crown didn’t miss a beat.  Audio from the original Woodstock PA system warning people to “keep off the towers” during the thunderstorm and “don’t take the brown acid' could be heard. 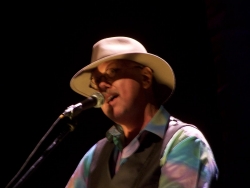 The screen flashed a collage of faces and depictions of events that shaped the world in the revolutionary days of the sixties.  Certain camaraderie was felt as Jeff Berkeley and friends perfectly created the harmony of Crosby, Stills, Nash and Young.  Guitarist Jeff Moore played the “Star Spangled Banner” just as Jimi Hendrix did on Saturday morning to awaken the 500,000 fans in upstate New York back in ‘69.

Guest artists for this tribute include local musician Peter Bolland singing lead on "High Time" with Jeff Berkely and the Back to the Garden Band." (photo, left)

The brass section players blew their hearts out re-creating the sounds of Blood, Sweat and Tears on “Spinning Wheel.”  No detail was forgotten; the flute in “Goin’ Up Country” and even the Kazoo in “Fixin’ To Die” added authenticity as the crowd sang along:  “And its one, two, three, four – what are we fighting fo? I don’t give a damn – next stop is Vietnam.”

The entire cast was on stage for “Woodstock” the song and a standing ovation brought them back for an encore.  “I pulled into Nazareth, was feelin' about half past dead - I just need some place where I can lay my head.”   Everyone knew the lyrics to “The Weight” and I doubt there was a dry eye in the place or a heart not filled with appreciation for the wonderful and uplifting blast from the past.

I was among the handful of people who were actually at the original Woodstock concert.  My friend, writer Ariele Brooks, was 16 at the time and lived in upstate New York but was unable to attend in spite of permission from her parents, since she had to work, so this Woodstock revival in Poway let her savor the experience, too.  Everyone here had a story and fond memories of the momentous times and great music.

The Poway Center even had a dinner buffett for concert-goers featuring "Purple Haze" dip, "Strawberry Fields" salad with "Mellow Yellow" vinaigrette and roasted brussels sprouts with pecans and cranberries.

The Poway Center for the Performing Arts Foundation is a nonprofit organization that offers professional performing arts events through a special partnership with the city of Poway and the Poway Unified School district.  For information on more upcoming shows, visit www.powayarts.org.