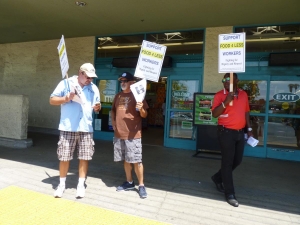 August 17, 2014 (San Diego’s East County)--If you shopped at Food 4 Less in the past week or so, Grove), you likely encountered picketers.  The United Food and Commercial Workers Union, which represents grocery store employees at most of the grocery stores in San Diego, have renewed their contract with major grocery store chain owners – except Food 4 Less.  The chain has about a dozen stores countywide, including East County locations in El Cajon, Lemon Grove and Santee.

The workers are not on strike--though the union has authorized a strike if negotiations fail. But employees have been holding informational picketing to educate the public and ask the public to support their effort by avoiding shopping at Food 4 Less, for now. According to a flyer from the union, Food 4 Less has proposed to cut hours, transfer higher paid work to lower paid employees, pay a smaller share into the workers' health and welfare fund, and has rejected the union’s previous agreement to provide new employees wage rates above the minimum wage .

Food 4 Less is owned by Kroger which also owns Ralph’s one of the largest and most profitable grocery companies in the US. Just last month, Kroger announced that it made over $500 million in profits just in the 1st quarter of 2014. East County Magazine contacted Kroger’s for comment, but the company did not respond.

The chain is highly successful yet Food 4 Less workers (who are mostly Latino and serve customers in the Latino community) earn less than their counterparts at Ralphs, which is also owned by Kroger.

Food 4 Less is a no-frills grocery store where the customers bag their own groceries at the checkout.  The question is – should workers at Food 4 Less be paid less than workers doing the same exact work at Ralph’s and other grocery stores?

Lourdes Ceja has worked at Food 4 Less for 17 years. She says, “Food 4 Less is part of a huge, profitable corporation that refuses to pay its workers fairly. Food 4 Less insists on providing us fewer hours of work, contributing less to our health care, and generally making it more difficult for us to make ends meet. We need your help to get a fair deal that helps support our families,” she asks.

I support the workers and didn't go in the store recently. I would never cross a picket line and am a member of a labor union. "Food 4 Less workers (who are mostly Latino and serve customers in the Latino community)" is not true. The employees represent the diversity in my town. Tom