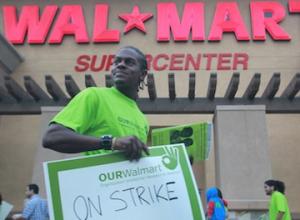 November 20, 2012 (San Diego)—Across the nation and in San Diego County, Walmart workers are poised to stage a walk out on Friday, traditionally the biggest shopping day of the year.

This Thanksgiving, Walmart workers at more than 1,000 locations are seeking a seat at the bargaining table.

“Unless Walmart takes immediate steps to improve basic working conditions, workers throughout the company's vast operations — from factories and warehouses to retail stores — will participate in a massive walkout on Friday, November 23," states an e-mail sent by Color of Change.

The reasons are many, but lifting workers out of poverty is a key factor. Wages reportedly averaging $8.81/hour add up to just $15,576/year for a full-time employee.

Even this level of remuneration is out of reach for many, since Walmart routinely keeps workers from getting enough hours during the week for full-time status that would require the company to provide benefits such as healthcare.

Walmart also "arbitrarily" switches up available hours to prevent workers from seeking supplemental employment elsewhere. “It's no accident that Walmart consistently has the largest number of employees who rely on public assistance,” Color of Change contends.

Workers contend that they want respect--and to work full-time in order to provide for their families.

Walmart, which positions itself as a discount price leader, has fought hard in the past to keep unions from organizing its employees. The company recently banned San Diego-Imperial Counties Labor Council Secretary-Treasurer Lorena Gonzalez from its stores.

Now Walmart is fighting back. The world’s largest corporation has filed a federal complaint claiming that United Food and Commercial Workers Union and its subsidiary, OURWalmart, are trying to force the store into collective bargaining even though the UFCW is not the official union for Wal-Mart's employees. Walmart has also threatened “consequences” against employees who walk out.

In San Diego, the stores where actions are planned essentially include every Walmart in the county. These are as follows:

For more information visit http://forrespect.org/ and