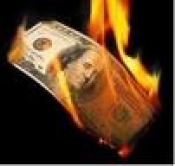 August 8, 2011 (San Diego’s East County)—Around the world, financial publications and major newspapers are reacting to the debt ceiling deal reached by Congress last week—and to the subsequent announcement by Standard & Poors that it has reduced the U.S. credit rating. Stinging criticisms of U.S. policies are making headlines around the world, with even normally conservative business editors taking harshest aim at the tactics of Tea Party members in Congress.

“It’s official, the whole world thinks Republicans are dangerous maniacs,” screamed a headline in Business Insider. Similarly, The Economist in London accused Republicans of “trying to point a pistol at the American economy” and called the problem “entirely of the Republicans’ own making.”

The German newspaper Bild observed that “the Republicans have turned a dispute over a technicality into a religious war, which no longer has any relation to a reasonable dispute between the elected government and the opposition..we should all fear the consequences.”

The Guardian tabloid in Britain ran a headline which read “The Tea Party is a real threat to America” and called the Tea Party Republicans “dangerous charlatans,” noting that unlike household debt, countries’ debts can be serviced over generations and that all major U.S. great advances from the internal combustion engine to the computer and aerospace industries had federal government funding. “In the aftermath of a credit crunch, a country that tries simultaneously to cut public and private debt will suffer prolonged economic stagnation or depression,” the story noted.

Australia News.com noted that Democrats wanted a mix of tax increases and spending cuts, while Republicans wanted only to cut government spending. But even when a Democratic plan threw out the tax increases, the Australian press noted, “It still wasn’t good enough for Republicans though because they said it didn’t cut spending enough.”

Perhaps the harshest criticism, however, came not from the foreign press but from Yahoo! Finance economics editor Daniel Gross. After Standard & Poors downgraded America’s credit rating from AAA to AA+, Gross published a scathing piece titled “Is the U.S. Credit Rating a Victim of GOP Sabotage?” He concluded that “it’s difficult to escape the conclusion that America’s credit rating was intentionally sabotaged by Congressional Republicans.”

Gross added, “It has long been obvious to all observers—to economists, to politicians, to anti-deficit groups, to the ratings agencies—that closing fiscal gaps will require tax increases, or the closure of big tax loopholes, or significant tax reform that will raise significantly larger sums of tax revenues than the system does now.”

He criticized Republicans for being “fixated” on taxes and opposing any and all tax increases or even closing loopholes to the point where the GOP thinks “the fact that hedge fund managers pay lower tax rates than school teachers makes complete sense.”

He did find fault, however, with President Barack Obama on one point: giving in to Republican demands to extend the George W. Bush tax cuts for two more years.

“Obama deserves some of the blame,”  the Yahoo! Finance economics editor concluded.  "But Congressional Republicans deserve much more of the blame.”

It is beyond me how a person can be considered a serious candidate for a national office in this country and not even know that there are two Koreas. Congressman Tancredos talk of giving literacy test to voters should definitely apply to politicians considering running for national office. What is Tancredos educational background? His remarks puting down voters are un-american. This dude should not be representing Americans in any capacity. Party Bus Charlotte NC

I guess I need to join the Tea Party. They sound like my kind of people. I bet King George had some of the same opinions of the first Tea Party.

If you are Tea Party, you are a terrorist. Sarah Palin is a mouthpiece for the Tea Party which represents nothing but hatred and dissension. Her rhetoric and violence-inciting imagery IS a form of terrorism and a prime example. She held Jared Lee Loughner’s hand while he murdered people with his misguided sensibilities. I was compelled to draw a visual commentary showing her handing him the gun on my artist’s blog at http://dregstudiosart.blogspot.com/2011/01/sarah-palin-made-me-do-it.html She'll go to any lengths and keep spewing her insanity for that attention (and the money of course.)