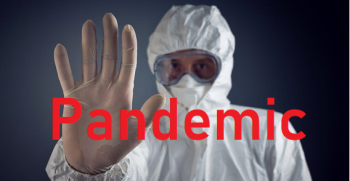 March 11, 2020 (San Diego) – The World Health Organization today declared a global pandemic.  More than 115,000 cases of COVID-19, the novel coronavirus, have been confirmed worldwide, with more than 4,200 deaths.

In the U.S., 1,237 people have tested positive for the virus and 37 have died.  The fast-spreading virus has reached 41 states and the district of Columbia, according to the Centers for Disease Control.

The COVID-19 crisis has contributed to a stock market crash.The Dow Junes plunged over 1,400 points today, officially into bear territory. The Standard & Poors index has fallen over 600 points in the past three weeks, erasing more than half the gains since Trump became president.

Fear of the disease has prompted cancellation of many major events across the nation. In California this includes some professional sports events including all NBA games after a player tested positive for COVID-19, the Coachella music concert, some major conferences, and events at universities to name a few.

The pandemic is having broad economic impacts and sparked warnings among market analysts who fear a recession is likely.

Some medical experts believe it may now be too late to contain COVID-19 in the U.S.

Recent cases have been confirmed in people with extensive contact with the public, including three TSA airport security agents in California and a Broadway theater usher in New York city.

There is no vaccine or cure for the virus, which has around a 2.3% fatality rate but much higher among people over age 60 and those with underlying medical conditions.

Frequent and thorough hand-washing is the best way to prevent spread of infection, along with maintaining distances of six feet from others as much as possible, since the virus can be spread through droplets coughed or sneezed by infected persons.

A new study by the National Institute of Health has found that the virus can remain on contaminated plastic and stainless steel surfaces for up to three days, so sanitizing frequently touched items such as door handles and table tops can also help stop spread of the disease, as well as using hand sanitizers when soap and water is not available.