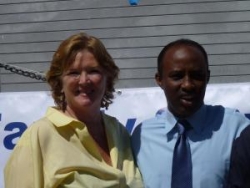 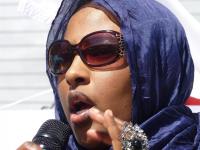 June 24, 2013 (City Heights) – “This is the largest refugee resettlement community in California and one of the largest in the United States,” Councilmember Marti Emerald said at Somali Family Service Community Healthcare Fair held on World Refugee Day event Saturday in City Heights Community Park, in collaboration with East African Collaborative. 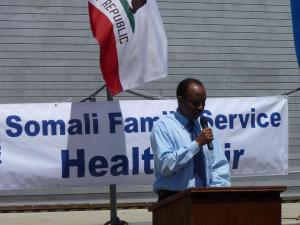 efugees in our region.  “I hope we can continue embracing and welcoming them” she concluded.

“This is really to bring the whole community together, not only the immigrant and refugee population, but also the community in City Heights… to help healthcare community to reach out in different languages,’ said Ahmed Sahib, president and Chief Executive of Somali Family Services.

The International Rescue Committee (IRC) assists refugees fleeing war or persecution in their homelands to help build new lives in America.  The latest waves of refugees are from the Congo, Somalia, and Burma. 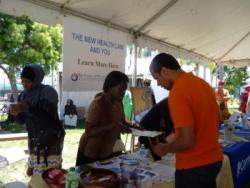 grams have been started to help refugees in our area. For World Refugee Day, 30 organizations came together to sponsor the event and bring information directly to refugees and their families. Many are working specifically to help bring healthcare information to the community including  Somali Family Services, Horn of Africa, Somali Youth United, Nile Sisters, Bridging Communities, HODA Center, and South Sudan Christian Youth and Community Organization, and South Sudan Christian Organization.

“We have a free food pantry two times a month and also school tutoring,” said Matthew Riek with Southern Sudanese Community Centers.  “We have also exercises for elderly every Monday.”

The IRC has established Connect-2-Work, a program to help teens ages 17-21 get job skills. 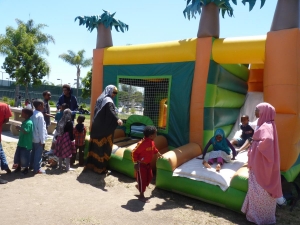 San Diegans for Healthcare Coverage was on hand to provide information on new federal healthcare benefits . As President Obama’s healthcare reforms take effect in California, a huge media campaign to tell people about new benefits titled “Covered in California” is planned.  The roll-out will include information in many languages.

“A lot of people have lost their jobs and they qualify,” said Irene Carr, nurse practitioner and midwife with La Maestra.

Cultural events celebrating refugees are also coming up. Including the Somali Independence Day at Jacob Center from 3-8 p.m. on June 29. The event will include dancing, food, and much more, said Abdi Mohamoud with Horn of Africa. 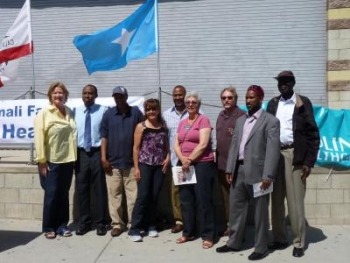