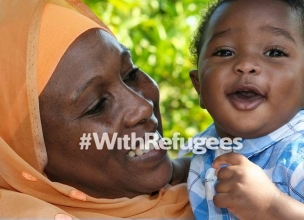 June 21, 2017 (San Diego) – Yesterday was World Refugee Day, a date established by the United Nations to acknowledge the plight of refugees and raise awareness of the world’s most vulnerable population.  An estimated 150,000 refugees live in San Diego County.

In 2016, the population of refugees and displaced persons surpassed all previous global records since World War II. According to the United Nations High Commissioner for Refugees (UNHCR), approximately 65.3 million people are displaced—nearly the combined population of California and Texas. Of this, 21.3 million are refugees» and, of this, women and children comprise about 50 percent.

Since 1975, California has resettled about 700,000 refugees. In fiscal year 2015/2016, San Diego resettled about 4,100 refugees. Our region’s first refugees came from Southeast Asia toward the end of the Vietnam War. The most recent refugees have come from Iraq, Syria, Afghanistan, and the Democratic Republic of the Congo.

The United Nations defines refugees as people fleeing conflict or persecution. By international statute, refugees are free from being expelled or returned to dangerous situations. Locally, the County of San Diego is the largest refugee resettlement site in the state of California. It is also home to the second largest population in the US of refugees from Horn of Africa.

In 2016, NSDI (Nile Sisters Development Inititiae) participated in Civil Society Strategy Meeting in New York City in advance of the United Nations High-Level Summit on Addressing Large Movements of Refugees and Immigrants» to stand #WithRefugees and advocate for refugee resettlement in the United States. Additionally, in March 2017, NSDI contributed to the United Nations 61 Commission on the Status of Women. The theme of the 2017 event was Refugee Women Leading Women Worldwide from Abuse to Economic and Social Empowerment».