August 3, 2014 (El Cajon)- Yesterday was another protest rally over violence against Christians in Iraq and Syria at Prescott Promenade in El Cajon. There was also a rally last month and a prayer vigil. The latest event was organized by the East County Chaldean American Chamber of Commerce. There was an estimated attendance of about 100 at this rally. 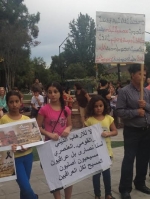 Vivian Haisha Shabille, a board member of the Chamber, was emcee of the event. She started by singing a song in Arabic and was soon joined by Deacon Tony Kabbane of the Catholic Melkite Church whose headquarters are in Boston, Massachusetts.

Then Deacon Kabbane gave some background and said that “Christians are being uprooted from their own homes.”

Paul Hannosh, who ran for Congress in another city, expressed his views. “I ran for Congress with the generous support of Chaldeans here… I didn’t win. I am a school board member, an Army veteran, and also very concerned about the community… I want to tell you to become politically involved.” He also said that Christians have a right to exist and “no one should deny this… What ISIS is doing is evil.” He brought up the pain and pleasure principle, which everyone should apply to the politicians. “Inflict pain on the politicians and they will respond…On the pleasure side, we need to support champions who will support our cause.” 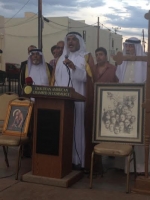 Sarmod Aboona, who is interested in going into the medical and political fields, states, “I’m a proud citizen of United States and a native of Iraq… Today marks the 10 year anniversary of church bombings in Baghdad.” No real action was taken then, or in subsequent church bombings, he lamented. “It’s extremely difficult for Americans or anyone living in the civilized era to imagine [these] acts... Today we should not only condemn these atrocities; the government should make a serious effort to end this… Tonight we need to get in contact with our Congressmen… I pray this genocide comes to an end in the very near future ...”

Shabille expressed how young men and women should get more involved in politics.

Johnny Sargon Jacob of the Assyrian Democratic Movement of El Cajon mentioned how this type of atrocity has happened because the people are against Christians. He brought up the three options that Christians had to choose: “to convert to Muslim.. to pay the taxes (around $400/ month) plus they’re not allowed to work, or be killed.” He added that the Muslims had invaded Iraq  and now rule because they are the majority. Several Muslims came to this rally from a mosque in Santee. “I want you all to get involved,” Jacob concluded.

Next up were three other people from the community who spoke in their native language without any translation, including one of the Muslims named Fadi Alissa.

Claudin Baron from Seyfo Center USA and a representative from  Assyrian National Broadcasting in San Jose shared her thoughts. “I was born and raised in Iran… I have a deep love for my nation. We are here today to speak about people who have no voice,” she said. “I understand some people didn’t attend today because it was raining… I was expecting to see more people here… We have been persecuted 33 times in 1400 years…” She mentioned that there are 60,000 Chaldeans in El Cajon, adding, “About 6,000 people showed up for a rally in Sydney (Australia)…They’re literally crucifying Christians… In the name of Jesus, unite!”

Shabille brought up how every year, on August 7, there’s a celebration to commemorate the lives of those martyrs who have died for their faith, but not this year. There was a framed photo on stage of them. “I ask and beg [for] your support. Protest, sign petitions and donate at Assyrianaid.org… I want to remind you this is history being repeated over and over and over again,” she warned. “The tombs of Jonah and Daniel are being destroyed.”

Other people from the community without any translators spoke about their thoughts.

Then Shabille invited all of the children to come up on stage, which they did. Many carried American flags and signs, and one man with them held a picture of Jesus.  A moment of silence followed, and then a prayer for this genocide to stop that day.

Deacon Kabanne shared some last thoughts. “There is no democracy without Christians. And the Muslims and Christians should be united against the genesis of ISIS.”

Kalasho voiced sadness. “When was the last time we had a gathering of Chaldeans, Syriacs and Assyrians together?” he said. “I get a lot of phone calls and e-mails back home… Churches have trickled down… East County houses 6000 Chaldeans, Assyrians and Syriacs.” He brought up the value of togetherness for the cause of humanity. “There’s more similarities than differences.”

Aboona then gave a speech in Arabic.

Shabille concluded with an Arabic song. 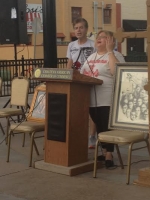 Later, Jacob explained to ECM, “August 7, every year, we celebrate Assyrian Chaldean Martyrs Day, commemorated before the massacre of Assyrians in 1933 in the village of Simmele (in Northern Iraq) where the Iraqi army massacred over 4000 men, women and children for just being Christians. Since then, Assyrians have been massacred and killed by the same enemy just for [their] belief and nationality.”

James Burdette, who came out of service at the First Baptist Church nearby, decided to join the rally because “I just wanted to see what the Chaldeans thought,” he said, adding that he was sure a lot of family members here are affected by what their relatives are experiencing in Iraq.

To donate online, visit: http://www.assyrianaid.org/Home.html and click on the ‘Donate Now’ button on the top right portion of the screen.

To see one update of the refugee crisis, view the link: http://www.assyrianaid.org/Refugees2014.html.

To learn more about Martyrs Day, read the article at: http://unpo.org/article/9898.

For an update on the White House recently issuing its first official condemnation of this, read the article: http://www.eastcountymagazine.org/white-house-condemns-isis-actions-against-christians.