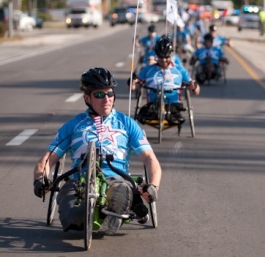 This Friday (3/25) the Honor Ride begins at 8:45 a.m. at the Embarcadero Marina, 400 Kettner Boulevard, in downtown San Diego. Riders from the local business community who raised at least $2,000 will take a 25 mile bike ride through the area.

Also on Friday is the grand opening of the Wounded Warrior Project's San Diego office from 2-4 p.m. The office is located in the Liberty Station area of Point Loma at 2468 Historic Decatur Road, Building 905, Suite 150.

On Saturday , March 26, the biggest event of the weekend, the Soldier Ride, starts at 8:45 am in Oceanside at the Oceanside Transit Center located at 195 S. Tremont St. Participants, both military and civilian, will ride on their choice of 10, 25 or 50 mile courses. Civilian participants must raise $125 for the WWP to ride with the soldiers. 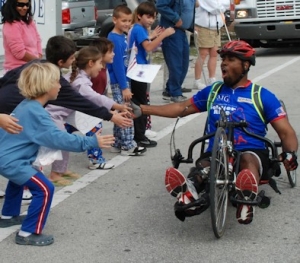 Soldier Ride started in 2004 when Chris Carney, a civilian, rode over 5,000 miles coast-to-coast and raised over $1 million for WWP. He did the coast-to-coast ride again in 2005, but this time he was accompanied by veterans who were wounded in combat in Iraq and Afghanistan.

In 2007, the event took its current form, with local rides open to the public in several major cities across the United States. Currently there are 13 cities holding Soldier Rides to raise funds and increase awareness of the for the WWP.

About the Wounded Warrior Project

The mission of the Wounded Warrior Project® (WWP) is to honor and empower wounded warriors. WWP's purpose is to raise awareness and to enlist the public's aid for the needs of injured service members, to help injured servicemen and women aid and assist each other, and to provide unique, direct programs and services to meet their needs. WWP is a national, nonpartisan organization headquartered in Jacksonville, FL. To get involved and learn more, visit woundedwarriorproject.org.

Wounded Warrior Project fights for those who fight for us, striving to "honor and empower wounded warriors" by raising awareness, enlisting public aid, and providing programs to meet the needs of severely injured service members and their care givers. -Jonathan Berkowitz

I would like to encourage all to get out this weekend and support this amazing organization. I am honored to be affiliated with these soldiers, sailors, airmen, and marines, and am proud to be a part of a nation and an organization that stands by their commitment to them. I am very fortunate that I was able to support three of my friends that are riding in tomorrow's Soldier Ride in memory of a fallen SEAL. He gave his life in Afghanistan last year, but he will not be forgotten. Thank you to all who continually give of your time and money to support these brave men and women!

*The views expressed in this reply are those of the author and do not reflect the official policy or position of the Department of the Army, Department of Defense, or the U.S. Government*