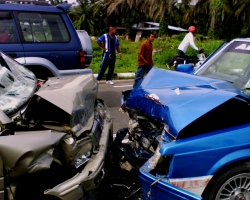 By: Miriam Raftery
Photo: Head On Collision - Wikipedia Commons (generic stock photo)
March 26, 2020 (La Mesa) – An SUV traveling the wrong-way on Interstate 8 just east of 70th Street in La Mesa struck a red BMW head-one shortly before midnight last night. Both motorists sustained major life-threatening injuries and were transported to Sharp Memorial Hospital in San Diego.
According to California Highway Patrol Officer Travis Garrow, the CHP began getting calls at 11:56 p.m. reporting the SUV traveling west in the eastbound lanes of I-8.  Two minutes later, witnesses reported a head-on collision.
The crash blocked all lanes of I-8 east and caused major damage to both vehicles. The driver of the Ford Expedition SUV, 28, from San Diego, is suspected of being under the influence of drugs or alcohol, Officer Garrow says.
The driver of the BMW, 45, of San Diego is believed to have been wearing a seat belt when the collision occurred. It is unclear whether the Ford SUV driver was wearing a seat belt.